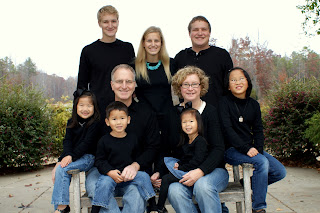 Mom and Dad have been married for 25 years.They have actually known each other since middle school, and began dating their senior year of high school. They both graduated from the University of Texas.
Mom and Dad are both in their 40s. Mom is a stay at home Mom. She homeschooled me in middle school and plans to homeschool the littles as well. Dad works in the banking industry.
Drew is 23. He is finishing up school at University of North Carolina at Charlotte. He also works at the bank. He did a semester abroad in Beijing in 2008 (and actually met Kate before we did!) and wants to go back some day!
Will is 20. He is a junior at Baylor University in Waco, Texas. He is a geology major there, and he loves everything about the outdoors!
I (Emily) am 18. I'm an incoming freshman at Auburn University. I'm majoring in social work there and hope to use it someday to live out my passion of adoption. I have amazing friends and love being with them.
Gracie is 11. She will technically be in 6th grade! She is a total tomboy but is typically not found without AnnaClaire nearby! We brought her home from China on the Fourth of July in 2010!
AnnaClaire is 5. She became a part of our family just 2 weeks before Christmas in 2006. She is outgoing, spunky, and sweet. She loves to swim, and do all sorts of other sports. She is all about her family and loves having such a big one!
Charlie is also 5. He, along with Gracie, came home on July 4, 2010. He is a very happy and easygoing boy, and has already brought us so much joy! He was born with club feet and had surgery this past March and is doing GREAT!
Kate is 4. She came home in November 2008. She is SUCH a princess. She wears her Snow White outfit every chance she gets, and her favorite thing to do is dance and she is ALWAYS doing it. She is very excited to become a big sister, although she'll likely always be the smallest!

Ellie is 1 and we are waiting to bring her home. She's our little miracle and definitely the completion of our family! She is said to be pretty shy but a little rambunctious, too :)