A Year of Charlie 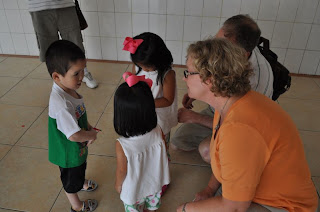 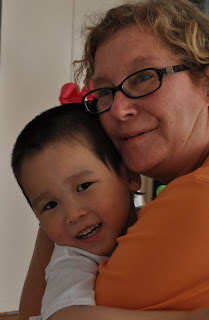 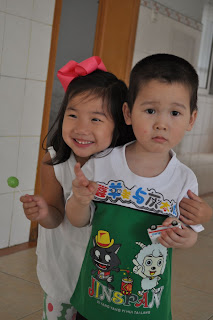 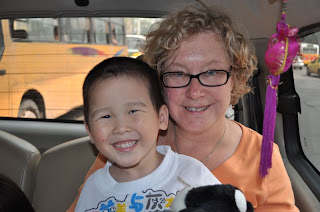 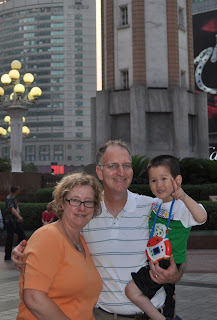 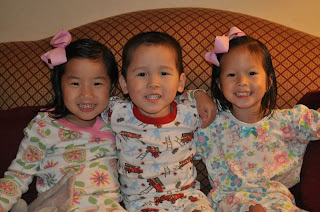 It was a Thursday afternoon in Chongqing, China. It was hot, humid, and we were anxious. We had been in this province for the past 3 days, wanting desperately to just meet our sweet boy. (Thank you, dragon boat festivals.) For the past year, we had been looking at his pictures, getting to know his features, and counting down until we could finally wrap our arms around him.
And the day was finally here.
He was 4 and a half years old and finally going to meet his family. The excitement was felt all around. Yet with it were nerves. We had only adopted baby girls. What was it going to be like to adopt a pre-school aged boy?!
The van ride to the orphanage was the longest ride I have ever been on. There was so much anticipation of what was about to occur.
I don't think anyone was anticipating what actually happened though.
We were quickly greeted and led from the car to an elevator. The moment we stepped of the elevator, there was a little boy. With a sweet little cowlick. OUR little boy. He was pointing to each of us, saying, "Mama. Baba. Jie Jie. Jie Jie. Mei Mei!" He was smiling as he pointed. And he never really stopped. There was an incredibly brief moment of tears when Mom tried to hold him in a picture and he wanted Dad, but that was really about it.
We played with some toys in the little playroom at the orphanage for a little. Charlie showed us his crib, got his pillow from it, and spent awhile pointing to the faces on the pillow and then to each of us in person. It was the most unique gotcha experience I have ever seen, but I do think it was incredibly good for him. Instead of being thrust into strangers arms in a strange place, he was able to get to know us in a very familiar place with familiar people around him. He got to show us his things, his nannies, his friends.
As the nannies stuffed his little hands with candies, coaxing him onto the elevator to come with us, I was sure the tears were going to start. Yet again, they never did. He simply smiled and squealed, climbing into the car with us. He and the little girls sang and laughed the entire way to the hotel.
In China, he would get into EVERYTHING and hold a pout like I have never seen before. But that was it. Other than that, he has always been an incredibly happy and go with the flow little guy. He has an AMAZING personality. He is tender, sweet, and incredibly loving. He is BRAVE. He had his club feet surgery in March and although in immense pain, didn't really complain all that much. For the next couple of weeks, he had casts from his toes to his trunk. At 5 years old, he couldn't move or walk for about 6 weeks. Added to that, we had some very hot days and the heat must've been immense on his legs. I can't even imagine. He had his casts changed again, this time shorter ones. He mostly scooched around, but he did have to learn to stand and take a few steps, as we cheered him on for overcoming something that he had at first been terrified of trying. Finally, he just got those off and is now sporting little Thomas leg braces. These he will wear for the next few months. He is learning to walk on feet that are straight... something that he is not used to. Through the whole process, he hasn't complained. He has just gone with it with a sweet little spirit about him that I adore. And he is already back to riding his bike! :)
He is an amazing addition to our family and I can't imagine life without this sweet little guy. IN a house full of girls, his go-with-the-flow and drama free attitude is very appreciated. He and Kate have an especially strong bond. If Kate is not there, he continuously asks, "Where's K Cakes?" They are so sweet together and always have fun together-- with very little arguing.
He has done very well this past year just transitioning into family life here. He loves having siblings and constant play mates. He hardly ever gets into things as he once did in China. He has had some struggles with the language and although you can understand what he says, he does stutter a lot so he does have speech therapy once a week. He is doing well with that :)
I love this little guy with all my heart and am so thankful that God chose US to be his family. There aren't many moments that a huge smile isn't on his face. He is just a happy little dude... always has been and I pray that he always will be. He is constantly just cracking himself up and I absolutely love his sweet little laugh.
To my little Charlie Man... I love you more than words can describe and my heart is very full with you in my life. I am so thankful that God called us to YOU and for everything you have been to our family. Happy one year together, little man! 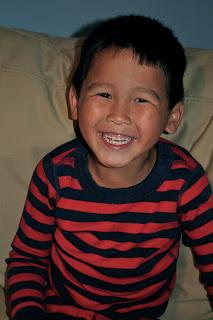 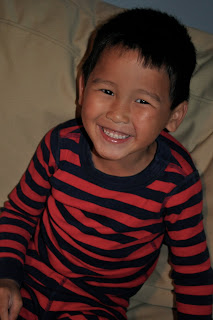 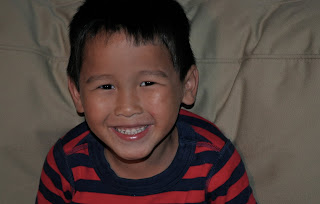 AW SWEET Charlie! It was so fun to follow his adoption story last year! Thanks for sharing.

Happy one year anniversary sweet Charlie! How happy we are to see you home where you belong.

He is such Blessing is to your family AND you all are such a Blessing to him! GOD BLESS YOU ALL !
G-Mommy E
WAR EAGLE !!!

Congrats on a whole year!! Charlie had a smile that could light up the world even on that first day!! SUCH a beautiful boy!!

What a sweet and handsome boy! We have been with our daughter, Lian a year as of April. You are so right about they need to meet the new parents in a familar place. I touched on this in my post"If you listen, God will speak" last week. Your story is so touching, I can hear the love in your words. Nice to meet you-Joy