Better late than never, I guess.

After all these years of parenting, we've FINALLY decided to implement Family Game Night.

And Emily, this is in honor of you! Our girl who LOVED to play games, has always said that's one thing (among many, I'm sure) she would have changed about her growing up years.  We didn't play enough games.

I LOVE the idea of playing games.

I love all that the children learn while playing games.

I love the family togetherness.
I LOVE the idea of family game night.

But actually doing it????

BUT Bill and I had talked and decided that TONIGHT would be THE night.  And once we told the children, we KNEW there would be no turning back.

So, this morning at breakfast, we told the kids that TONIGHT would be.....

We all got in jammies, turned on Christian radio and then started our evening with a pizza dinner.

Then we moved in to playing our games!

The first game of the evening was "Drop the Bean into the Tin Can."  What, you've never played that game????

Well, I will tell you, I wasn't sure if we'd be playing any other games tonight, because they LOVED this game and kept wanting to play.  (Charlie was working on his Wolf badge for Scouts and needed to play a homemade game.  This one was one of the suggestions and sounded easy enough, so we tried it.)

Here's Grace taking her turn.  Can you see the concentration on her face? 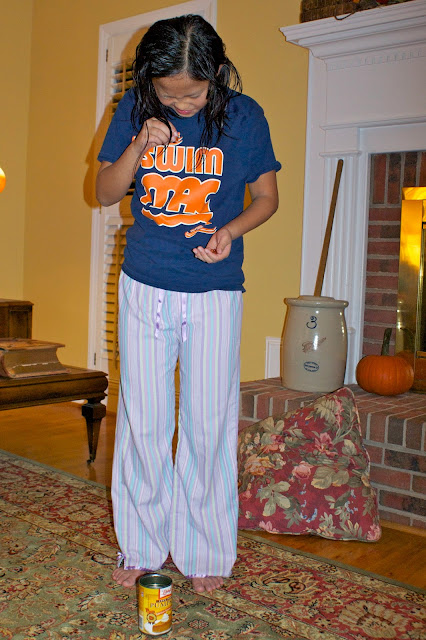 Next we played Uno.  We chose this as it's one that we could all play together.  Team Ellie/ Daddy were the winners of that one.  Ellie actually did a lot of the playing since it's just basically matching colors and numbers. 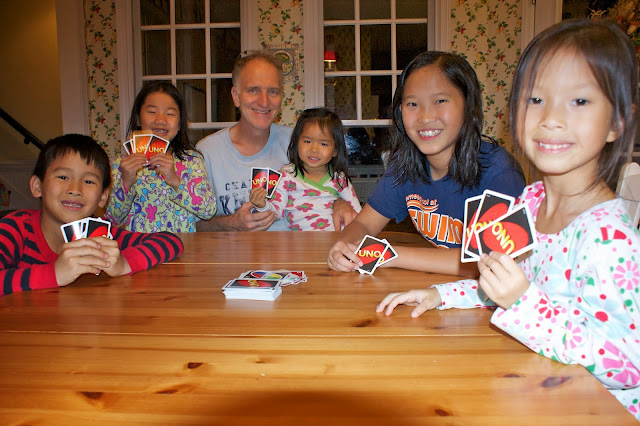 After Uno, we divided into 2 groups.  I had the 3 younger children, and AC and Grace played games with daddy. 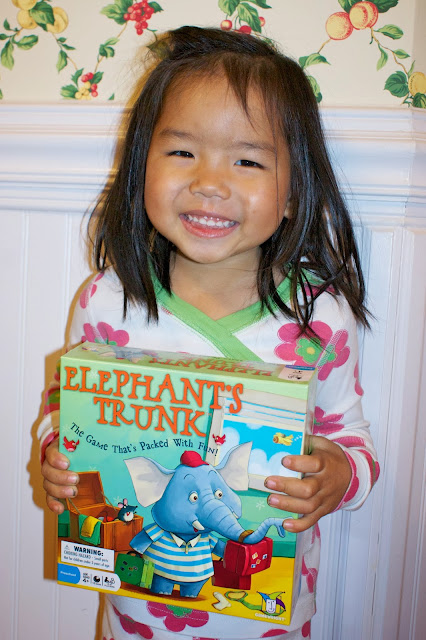 Then Kate chose Orchard.  We are big fans of Haba games in our house! This is a REALLY cute co-operative game that Ellie could play as well. 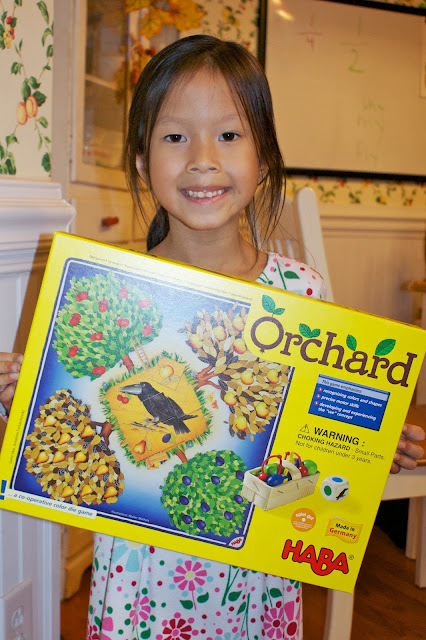 And  here's Charlie with his choice. A race car game~ just perfect for our little man. 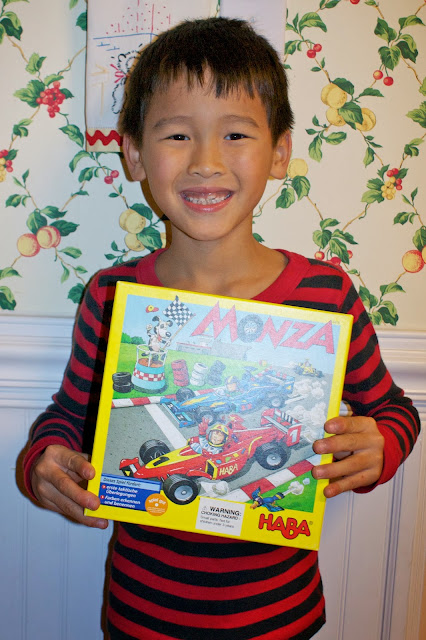 Meanwhile, AnnaClaire and Grace were busy playing Grace's choice of the Great States game.  I think they were playing the Jr. Version tonight, though we have both. 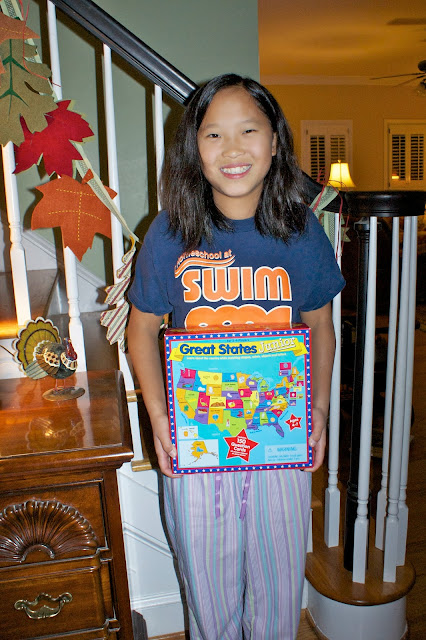 Then it was time for our "Special Dessert!"

Although I had visions of baking a special dessert, in the end I made things easy on myself and we served Root Beer Floats.

This was a first for the children and they LOVED them.

Except for Kate, who announced that she doesn't like soda, "like Sissy."  Ok then.  She enjoyed a dish of vanilla ice cream. 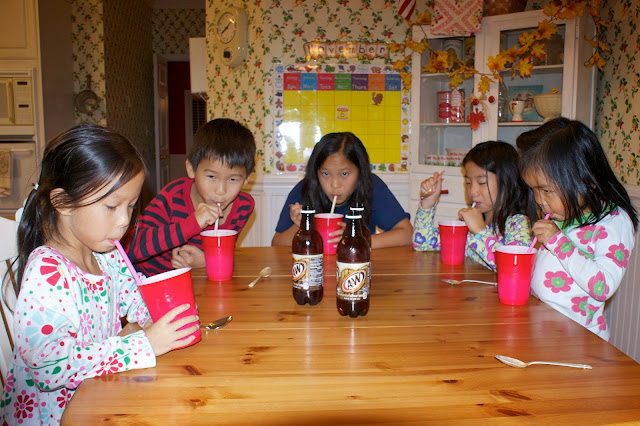 After dessert, Baby Sister headed to bed, and we played one more round of games. 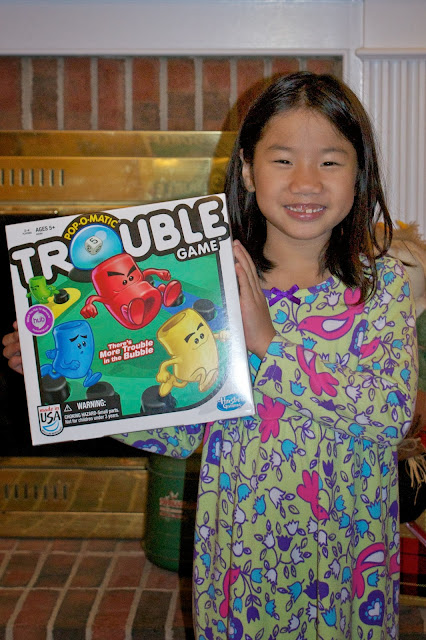 And Charlie, Kate and I played the pirate game. The name is in German, so we just call it The Pirate Game!  For some silly reason, I REALLY like this one, so this was my choice! 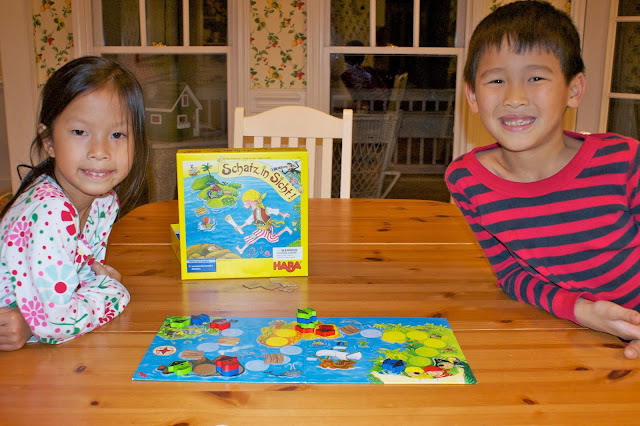 We all had SUCH fun.

Want to join us next month?  We'll be having Family Game night the first Saturday night in Dec.  Not sure what our "special" dessert will be, but we'll be having pizza again for dinner.

It's already on the calendar!

What a GREAT idea. Love the easy and fun dinner and dessert. Good job capturing the fun in pictures. I feel like I was there. Love all the smiles!!! Ah...if only we lived closer! How many times have we said that?

Love this, Pam! Sadly, our kids have asked for this for years, but we have yet to implement it. Maybe you'll inspire me to get going.

We would love to come! Too bad it is such a long commute! Sounds like fun and something we need to start doing in our family. So often the evenings get away from us, and we just don't know where the time went.