About time for another update 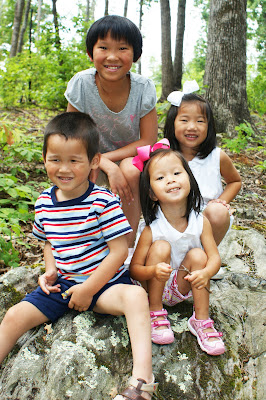 Dad took the kids for a hike over the weekend... 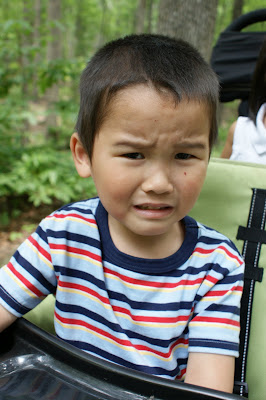 Something set Charlie off. Who knows what! According to Dad, he did this the whole time. 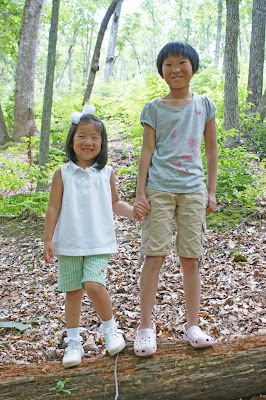 The big girls had a blast, though! 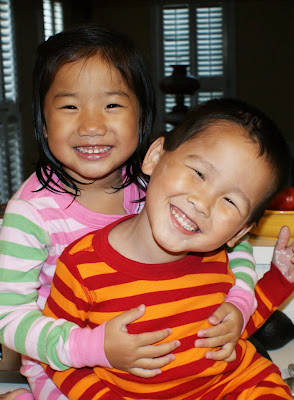 These two are my posers! They LOVE to have their picture taken. They were helping me make pancakes in this one! 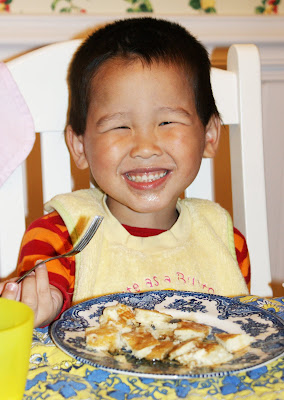 And we discovered that our little man LOVES pancakes! (don't mind the bib. He likes to wear them and we have no boy ones.)

We are still doing well. I think this has been our easiest adjustment yet. Seriously. I never EVER would've thought this would be so easy considering not only did we adopt "older" kids (although seriously... do people consider 4 old??? Even 10... still so young!) but we also adopted 2 at once. But there must be some serious prayers going up on our behalf, because we are doing great! I keep questioning myself how long we've been home... because it just seems like we've been back with Gracie and Charlie for so much longer than just 10 days!

It is so nice to be home. To have our own space. To sleep in our own rooms. To eat our own food. To have a yard to play in. After spending 24 days in China, these are all things that just feel so GOOD!

Charlie has calmed WAY down now that we are at home. We seriously thought that being home was going to be a nightmare with him. We thought he'd be into EVERYTHING in sight. Honestly, he has been pretty perfect. He doesn't really get into anything he's not supposed to. He isn't bouncing off the walls. He plays pretty nicely and loves a good snuggle, too. He is SUCH a sweet boy. He also folds his hands at every mealtime until everyone sits down and we pray. It is precious. He has even learned the little song we sing (God our Father) and sings along. He has the BEST manners, too. He is always thanking Mommy everytime she gives him something. It is soooo cute the way he says, "xie xie Mama!" Like I said yesterday, he can be stubborn... and when he is, he doesn't give up easily. Even this has gotten MUCH better in the past few days. I'm telling you... this is one sweet boy. He, for the most part, is very flexible and goes with the flow. He understands a lot and will do what you ask. It will not be long at all before he is speaking English. He amazes me how much he already knows! He LOVES to go bye bye and gets all excited whenever it is clear that we are going out. He is a really sweet brother! It is especially fun to hear him and Gracie communicating. I love that they have eachother even when they can't understand much of anything around them!

Gracie is doing great, too! She is not very good about finding things to do, which is especially hard when the other 3 are napping, since she does love to play with them. Mom did buy a few games and she LOVES to play games. She and Mom played trouble for almost 3 hours the other day while AC, Kate, and Charlie were napping. She LOVED that. She also enjoys watching movies. Today, she helped me make double chocolate chip cookies! She loves to draw and color. We are still making daily trips to the pool, which is a huge hit for her... and everyone. I might've already posted this, but she has mastered the diving board and she and AC spend a lot of time jumping off, swimming to the ladder, and doing it again. She is quite the swimmer, but is struggling with breathing while she swims! We took her to Chinese Church the on Sunday, as a nearby Church has a pretty big Chinese ministry. She loved following along in her Mandarin/English Bible. I'm sure it was all pretty confusing, as it's not like she has heard anything about Jesus before. We will definitely keep taking her there! She is such a sweet girl. So lovable, fairly shy, very flexible, and extremely helpful. It is not nearly as hard for Mom to go out with the 4 of them, because she has the stroller for Charlie and Kate, and Gracie always stays close by, and hold AC's hand! Like I said, langugage has been our only stuggle with her. In China, she would repeat a little bit of what we were saying, but she hasn't repeated much of anything at home. She really hasn't picked up on much since we've had her, either. Language will either be slow, or she will surprise us, we'll just have to see. I cannot wait to understand what she is saying... and for her to start opening up to us what is going on in that sweet little mind!

AnnaClaire and Kate are doing well, too. It is much easier being home, let me tell you. They both, AC especially, had really difficult moments in China. I think AC was just having a lot of trouble with the whole giving up her "big girl" role to Gracie. She is doing so much better now and is back to her sweet self. Yes, she still has moments. But what 4 year old doesn't? She ADORES Gracie and loves playing with her. They are 2 of a kind! Kate is one who likes her space. Of course, being one of 7, there are constantly people accidently bumping or touching her. That's not to say that she doesn't love her newest siblings... she adores them! She just needs to have some time to herself, as that is just part of her nature. They have both really done well, because adding a 4 year old brother and a 10 year old sister is not easy when you are the ages that they are!

Charlie and Gracie both had dr. appts on Monday, and everything looked good! Charlie was 31 pounds and 38 inches and Gracie was 52 pounds and 50 inches. Gracie isn't even on the charts for height or weight. Charlie is in the 5% for weight and the 25% for height! So they are both pretty little! They were both really good throughout the whole appt. I translated to Gracie before that she and Charlie had doctor's appts and they wouldn't need any shots, but would have to get blood drawn. She kept repeating some of the words over and over and making a sort of wincing sound and holding her arm. She then went and said it to Charlie and Charlie says, "ow ow ow!" Anyway, they were both VERY good, according to Mom. They held their arms out and didn't make a peep. Hmm. I could take a lesson from my siblings! (I'm one of those people who is about in tears at the thought of getting my blood drawn... and needs juice right after because I feel faint! I know.. I'm a wimp.)

Ha Emily...I'm one of those weak hearted fainters as well! When I got the chicken pox shot at the age of 10 I fainted dead away and hit my head hard on the patient chair! And I *always* lay down to have blood drawn. When we were in the Beijing airport going through security, I about fainted because it was so HOT and I was overheated!

Love the update - your sibs are beyond adorable! So glad the adjustment is going smoothly.

so, can't talk Gracie into bows yet, eh? Headbands?

I think that is amazing that she even likes to follow along in her chinese bible - SO SWEET!! You guys are awesome! I loved this precious update!

Would it be possible for you to feature yourself, Emily? What are your special interests, hobbies, future educational goals, etc.

Then maybe your mom and dad, the older brothers . . .

You have such a wonderful family story . . . may we know more about all of you?

Hi H family! I have been following along - just beautiful! Glad to hear the adjustment is going well. Seeing you all with Charlie makes me even more anxious to bring home our Hudson. :)

It sounds like they are adjusting wonderfully.
We had a 16 yr old Japanese exchange student for a weeks and she did know how to speak English. She was just worried that she would say the wrong word and afraid to try. Maybe Grace is feeling some of that. It will come especially as she feels more comfortable with all of you. You will probably start to overhear her talking to the little kids first.
Our prayers are with you.
Joy

Hello. I just wanted to say your family is beautiful and I love your blog. My sister adopted a young boy from Korea and he had never been outside much and lived in a city. When he arrived in the US he was scared being outside in wide open spaces for a while until he got used to it. Maybe Charlie feels that way too. Bless you and your wonderful family.

I have followed you for a while, but don't think I have ever posted! I have read (no experience here) from another blog who adopted that sign language was a lifesaver to get them through the language barrier while the child was learning English. Have you tried this with Gracie?

I also live in NC, NW corner. I have nephews closer to you, one that is 17 BTW! I told his mom he should try to meet you! HA! Don't you just love matchmakers! You seem to be a loving, caring, Christian gal, just the kind of girl I would like my own sons to meet one day. But since they are too young, I decided to mention to the next best thing...my nephew! LOL

I love reading your story! Keep living for God! You are an amazing young lady!