Catching up from Labor Day Weekend~

We had Grandma H. in for the weekend to celebrate her birthday.  Since she reads the blog and always tells us that our road trips look like such fun, we decided to take her on a road trip for her birthday and let her experience all the fun first hand!

Our destination was Lynchburg, VA.

We left on Saturday morning, and our first stop was the Patrick Henry Memorial. 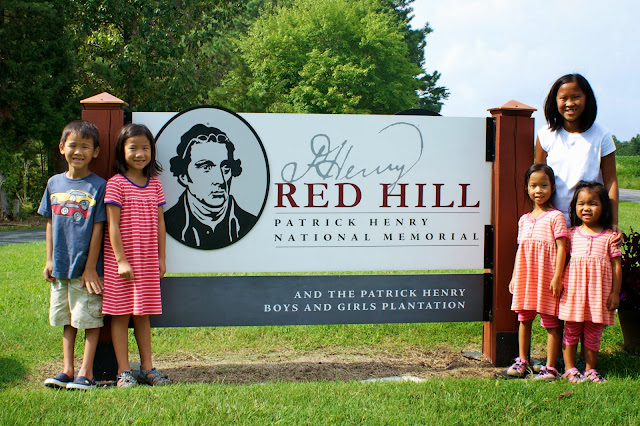 We arrived at lunch time and had a picnic lunch on the beautiful property.

Then we toured the property. 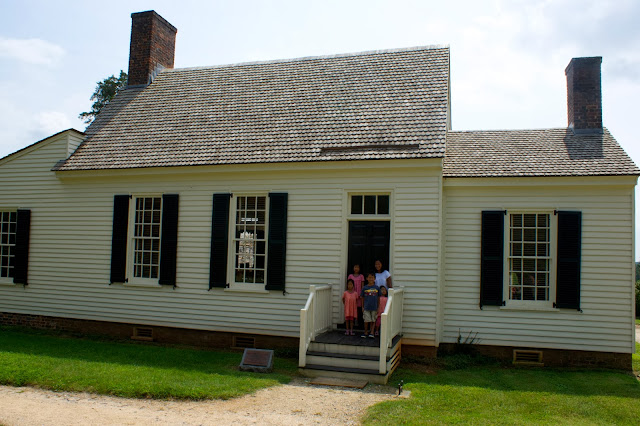 6 mos. before his death, while living on this property,  Patrick Henry wrote:

"I live much retired amidst a multiplicity of blessings from the Gracious Ruler of all things."
His large family and this beautiful home and land were amongst his greatest blessings. 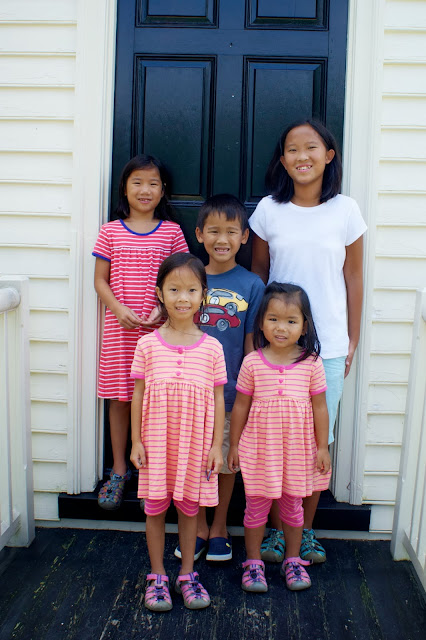 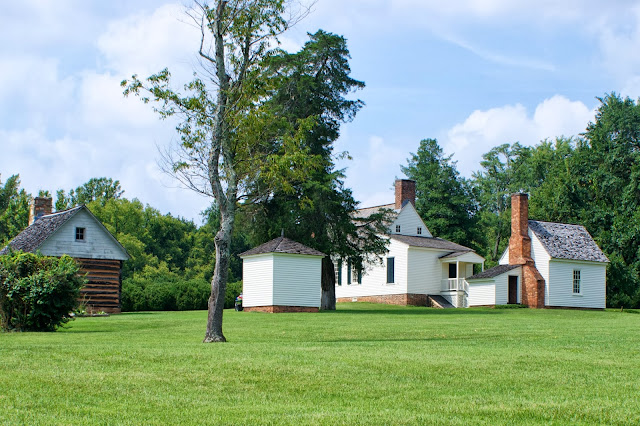 The back of the house and some of the out buildings. 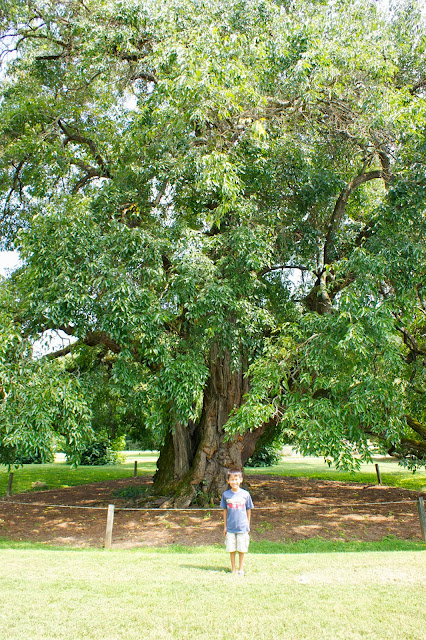 This beautiful, old tree has been on the property since Patrick Henry lived there.  It's called an Osage Orange Tree.  It's over 300 years old and is the largest tree of its kind in the America.

Patrick Henry is buried on the property.

I loved this quote from his will:

"This  is all the Inheritance I can give to my dear family.
The Religion of Christ can give them one which will make them rich indeed."

Grandma and the youngest 5, of her 14 grandchildren.

After our visit we headed in to Lynchburg and enjoyed dinner at the Depot and afterwards, watching the kids swim in the hotel (indoor) pool.

We woke the next morning, Grandma's birthday, and had a big breakfast at Cracker Barrel before heading to Poplar Forest. 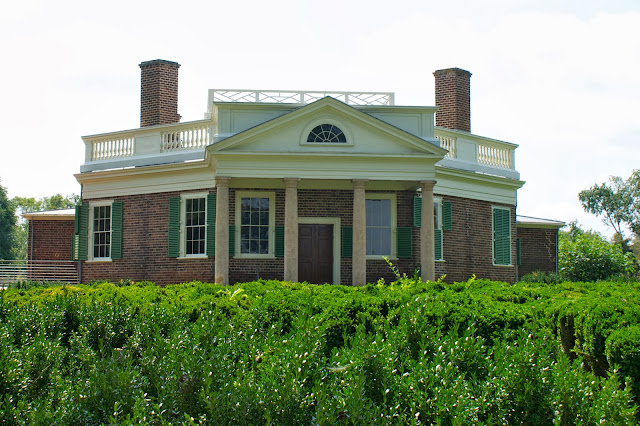 If this looks somewhat familiar, that's because it's Thomas Jefferson's "country" home, and it bears some resemblance and similarities to Monticello. 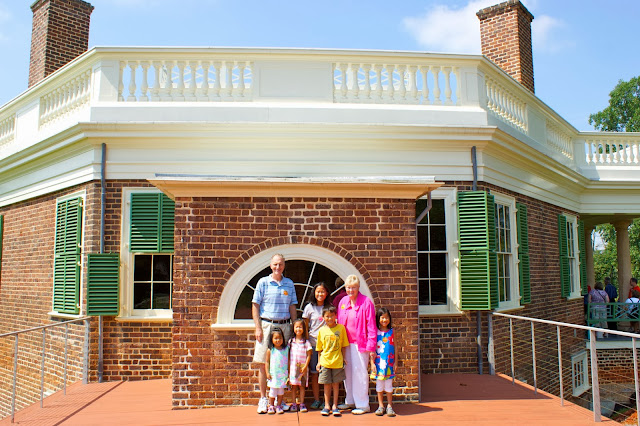 This property is still in the process of being restored.  Though interesting, there's not nearly as much to see as at Monticello. 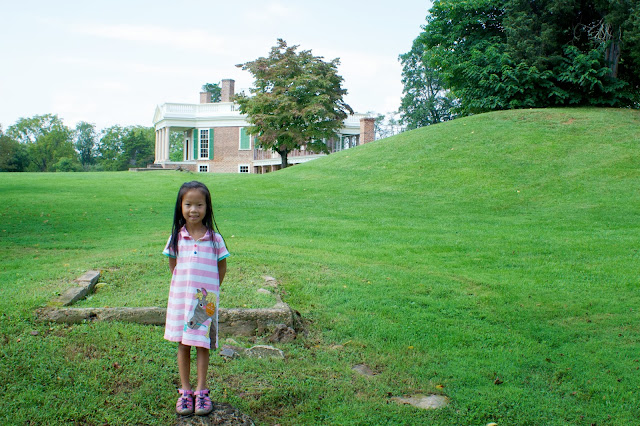 The grounds were very beautiful and hilly, though most of his original property has been sold and developed. 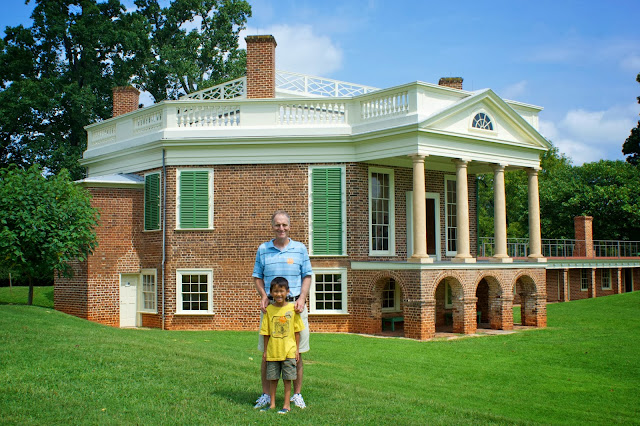 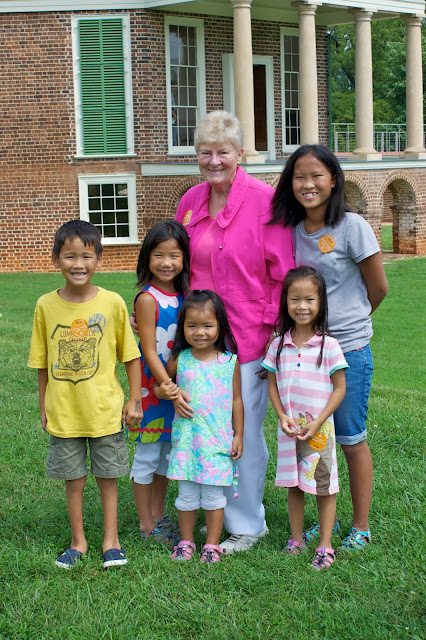 A birthday pose with the grandchildren!

After Poplar Forest, we loaded the van and headed to the National D-Day Memorial. 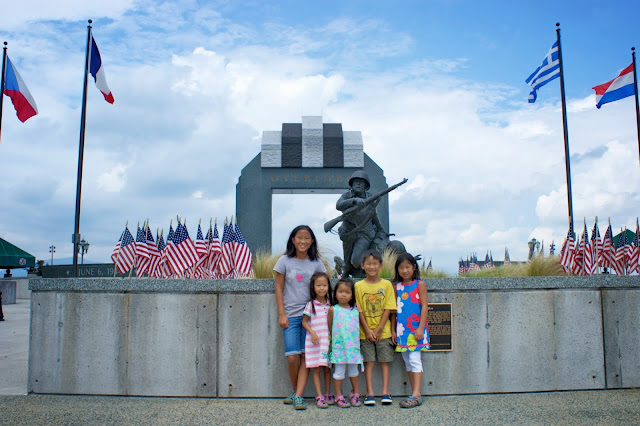 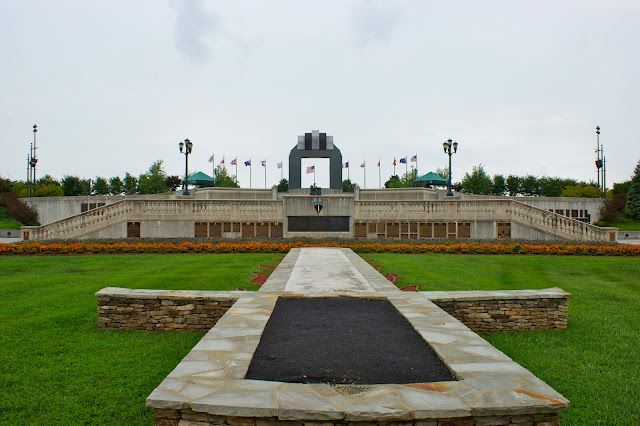 The site was really, really well done.  And every single thing that is a part of this memorial has some sort of meaning or significance. Nothing  was placed there "just because."  You really do need to take the tour to find out about exactly what you're looking at. 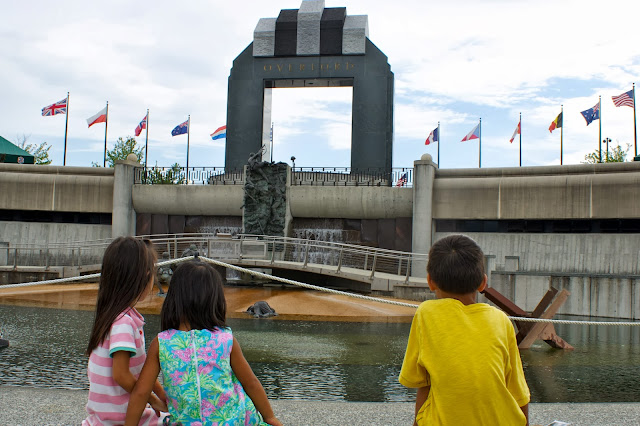 This part was showing the actual landing on the beach at Normandy.

Grandma and AnnaClaire opted out of the tour and sat on the covered porch of the visitor center. I'll let you in on a little secret....Grandma is not a big history fan.  No she's not.  But she LOVED spending the days touring with her family. She was real a trooper!

After seeing the Memorial, we loaded the van in search of some dinner and then headed home. We got in late that night.  It was a LONG day!

And we added Drew to the group.  He was in town for a weekend event, and spent Labor Day with us.  Such fun to have a quick visit with him!  When they're grown and living out of town, you take what you can get, right???

Happy 78th Birthday, Grandma!  So glad we could celebrate with you!

Never even knew this historical site existed! Thanks for sharing!

Hi, I've been following since you traveled to China the first time. I'm the mom to two China treasures, plus three home grown treasures. I wanted to thank you for your post about Outdoor Secrets. I homeschool as well and it's a perfect fit for my first grader. Thanks again!
Sharon

Thanks for commenting, Sharon. Wow! You have been following for a LONG time! I'm glad you and your little one are enjoying Outdoor Secrets, too.

Looks like so much fun! I love going to historical sites. Fits right in with homeschooling subjects we are studying right now.

So nice that your "big boy" could be home to enjoy some family time with you and his grandma.

Can I just say how jealous I am?! You have so much history at your fingertips out there! :) What a fabulous way to spend a long weekend...learning history and celebrating a birthday.