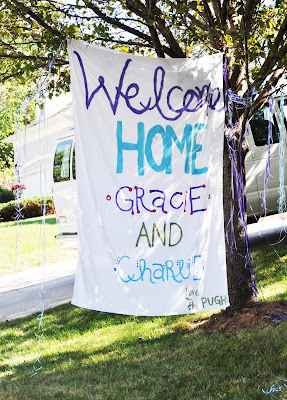 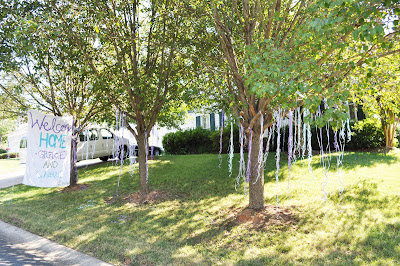 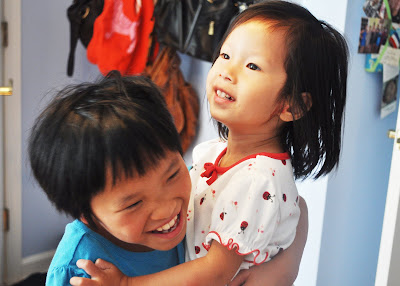 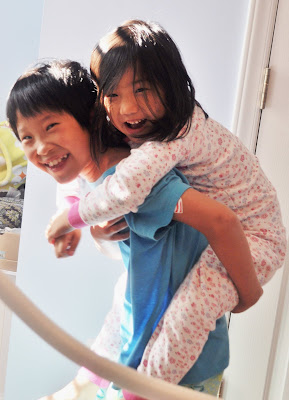 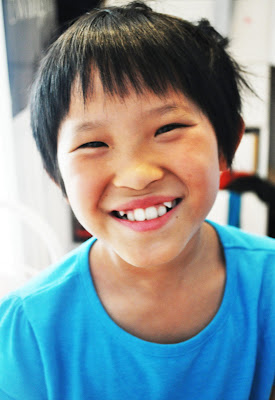 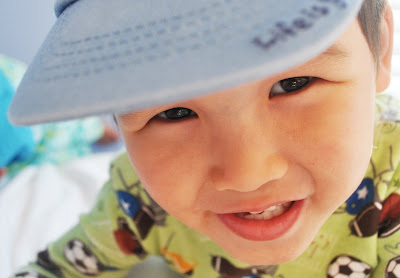 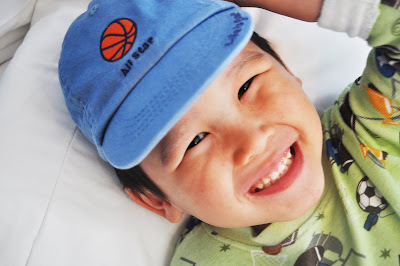 We are doing well. The jet lag is TOUGH! I forgot how bad it is coming home! Dad and I are really struggling with it. Mom says she is feeling pretty adjusted. Gracie and Charlie have both been up fairly early (5 something). The little girls have been champs! They woke up at 8:30 yesterday morning and 7:30 this morning (but I think they would've maybe even slept longer if a certain someone hadn't woken them up!) We will get there! It is 9:15 though and I am already ready for a nap...

Our first day home yesterday was great! Charlie and Gracie both slept well! Charlie was in the portacrib in Mom and Dad's room, and Gracie was in her room. She loves her room. I was a little worried because it's so girly and she's so not girly, but she had the biggest smile when she saw it for the first time. It was so sweet. All 9 of us were home yesterday and it was such a good feeling. Charlie has really taken to his big brothers, especially Drew.

Our house is full of food, which we are so grateful for! We did end up going to On the Border yeseterday for lunch :) Hey- after almost 4 weeks without it, we were craving it! Grandma, Aunt Linda, and Uncle Peter met us there before they headed back to Atlanta. We had such a good lunch. I don't think Gracie and Charlie are huge fans of Mexican, though! Charlie didn't eat much, and Gracie picked a chicken sandwich and french fries.

I was so mad I didn't bring my camera to lunch... I didn't even think about it. Grandma had hers and took some really cute pictures of everyone, so eventually I will share those when Grandma gets them to me :)

Last night, Will was out with the girls and our neighbors were outside. Gracie had a BLAST with them! She is amazing at hula hooping and jumping rope! They have a ping pong table and we learned that she is really good at ping pong, too. It was so fun watching her play ping pong, as in her camp interview, that was listed as being her favorite activity! She had so much fun with our neighbors (twin girls who are 8 and boy who is 10) and one of the girls even said, "even though she speaks Chinese and we speak English, we can still have SO much fun playing together!"

So anyway, we are doing well. I am amazed at how well Gracie and Charlie are doing with it all. Everything about this is so different from anything they ever have known... they love their new house!! We thought Charlie would be into EVERYTHING and we would be having to baby proof a bit, but he actually has been really good and hardly into anything he shouldn't be in to :) He is such a good boy! (Joy and Dana, that's for you)

Thanks for all of the prayers!!
Posted by Emily at 8:58 AM

I was wondering how long it would take you to get your OTB fix! Let me know when you go to Chick-fil-A and we'll meet you there (we leave for the beach on Fri. for 10 days but if you go this week, let us know!) Praying the jet lag wears off quickly. So happy to hear that Charlie and Grace love their new home...I knew they would! What a wonderful treat for Grace to have neighbors around her own age! Sounds like you all may need to get a ping pong table for her! ;)

These pictures are great, Emily! You will always treasure these pictures I am sure. And love the header! Only problem is....it appears your moms arms look a bit lonely? Haha ;) No, all kidding aside...y'all all look sooo happy.

Glad things are progressing well! Jet lag is so tough. Kevin and I really struggled with it this last time! Praying for things to continue going well!

Welcome Home!
I am so glad everyone is settling in! Hoping you "kick" the jet lag SOON, cause it's terrible!
I really enjoyed following you in China, you did amazing with your updates!

So glad you made it home in one piece! God has blessed your familly immensely! Praising Him with you for all He has done! Welcome home, Gracie and Charlie!

Welcome Home!! Such a sweet family you guys are! Charlie and Gracie look like they've been with you guys for years! Congratulations!

So glad to see you home and posting to your regular blog again! We ended up not being in your city on the right day after all, so I was glad to see a large welcoming committee for you guys!
Praying that the jet lag is quick to go!

I'm so glad you all made it home! Thank you for posting updates throughout your trip--I really enjoyed reading them. I can't help but feel overjoyed myself for Grace + Charlie as well as your family, just as if it were me welcoming 2 little ones into my own family.

Welcome home and congrats again! So happy for all of you!!! I'm guessing CFA was lunch today? ;-)

Love seeing that great big picture of all nine of you on the main page!

Thanks for keeping us updated even during the jet lag. I hope you all make it through it quickly! I still can't believe you are all home. It is so surreal and an answer to so many prayers. Also, I'm so glad you reminded us that Charlie is a good boy cause we weren't sure. ha ha You know I am just giving you a hard time. (: I could pinch his sweet cheeks off his face. And I love that Grace still has her precious smile. we will be waiting too for that Chik fil a meeting.

Simply amazing. This post and the pictures just makes me grin.

I love the new family picture!! Such a beautiful family. So glad you guys are home and the kids are enjoying their new home. I loved reading each and every day of your journey!!

I love these!!! =))
I'm sure you'll have a really fun summer.
I followed your whole trip on their website. Sweet Gracie has the sweetest smile :)

Em, I'm impressed with all of your pictures. I need to get some downloaded. I did get the ones on the 4th of us all. That is all I've gotten done.

BTW, I just showed Joel Gracie's picture and he got so embarrassed. Pam, I need to email you. Was thinking of an idea involving these two and skype. I so want him to be able to keep some of his language skills. I miss you all so much!!!

I had to go back and look at the header after reading L's comment. I have to say that your Mom's arms do look empty. ;)

So glad that you are home safe and sound. I have been glued to your every post :) You are all so blessed, it looked like such an amazing trip. Looking forward to seeing you all soon. Blessings, Amy

Ok we are getting updates from Leslie... missing your news:)