Last weekend we headed to Atlanta!

Emily is interning at a church in the area this summer.

And we decided it was time for a visit!

On Friday, we loaded up the van and set off~

We stopped at the SC / Georgia border rest area for lunch.  But no photos of that.

We arrived at our hotel, and Emily was there to meet us.  We let the kids swim (and again, no photos of that) and settled in for a nice chat poolside with Emily.  SO miss that biggest girl of ours!

She is doing great.  And although her internship has been a stretch for her in a few ways, she is seeing for herself the growth she has had.  And even she says that that's been a good thing!

After swimming, we headed over to Emily's host family's house for a cookout.  You would think I would have thought to have snapped a photo of Emily and the  precious family hosting her, but again, I did not.  Geesh. 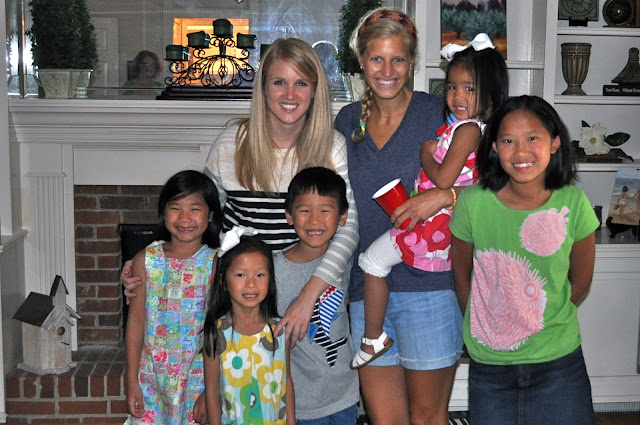 I did get this of the kids.  The older girl in the photo is the oldest daughter of the "B" family.  She graduated from Auburn a year ago.  Her younger sister is Emily's friend at Auburn.  Emily's friend, Katherine, is doing an internship at a church in Austin, Tx and is being hosted by a family there.  And Katherine's parents are paying it forward and having Emily for the summer.  SO nice how that worked out!  AND we know that Emily is in very good hands while away from us.

They served a delicious meal to our crew and we had a nice evening of fellowship and fun!

We left short 2 girls, as AC and Kate stayed for a sleepover with sissy! 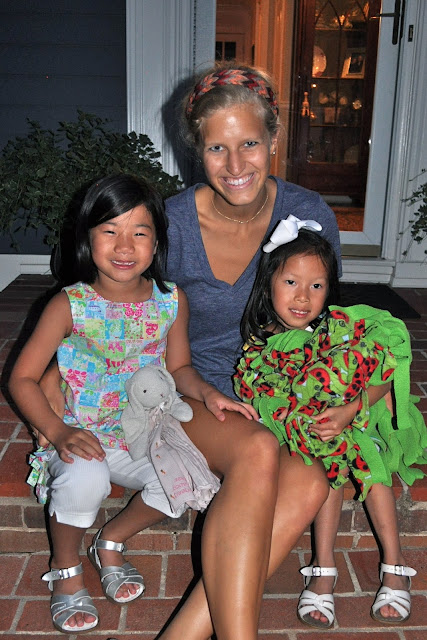 Sissy gave them mani/ pedi's and let them catch some fireflies before heading to bed!

The next morning Emily met us at the hotel bright and early, and we headed off for a day on Lake Lanier! 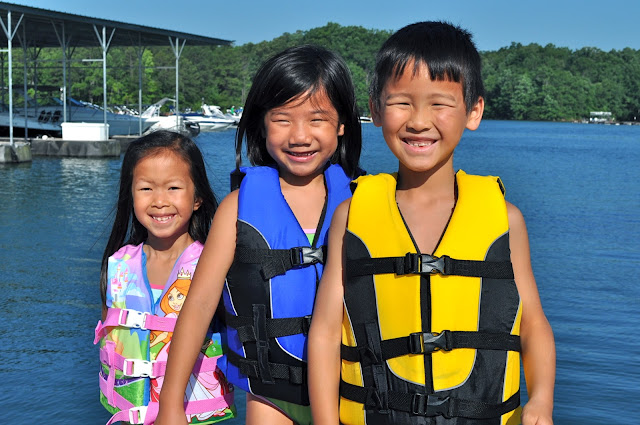 As you can see, the day was perfect!

We had a bit of a wait for our boat to be readied, but the kids had fun in a splash pad area. 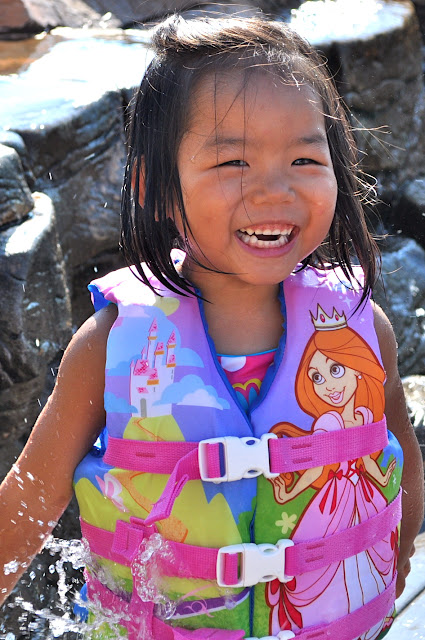 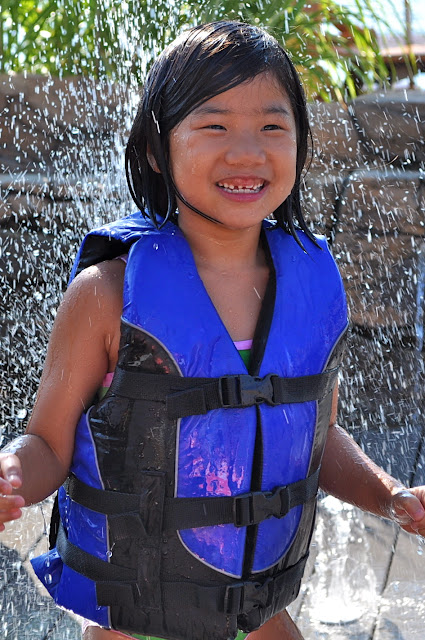 And playing on the dock 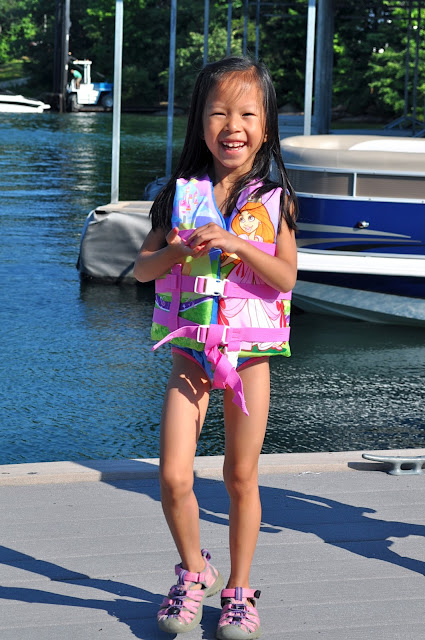 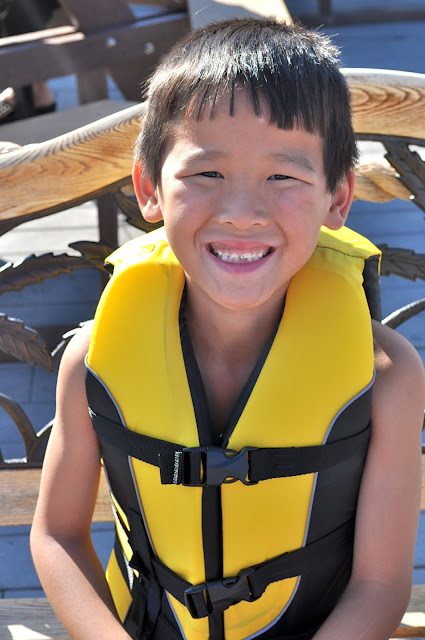 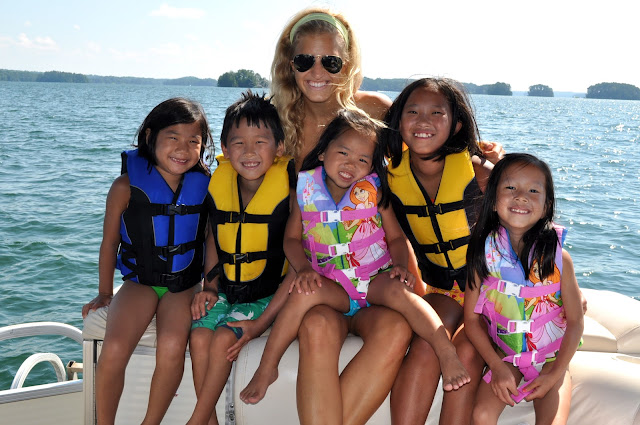 We were on the boat! 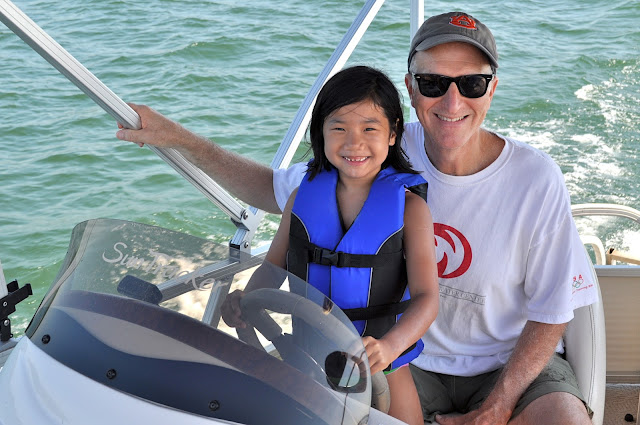 And having some big fun! 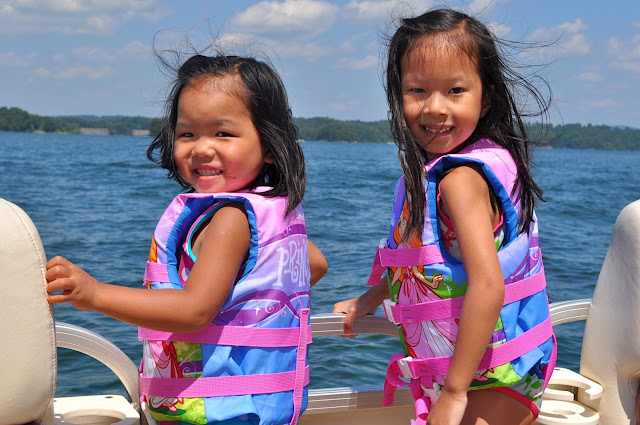 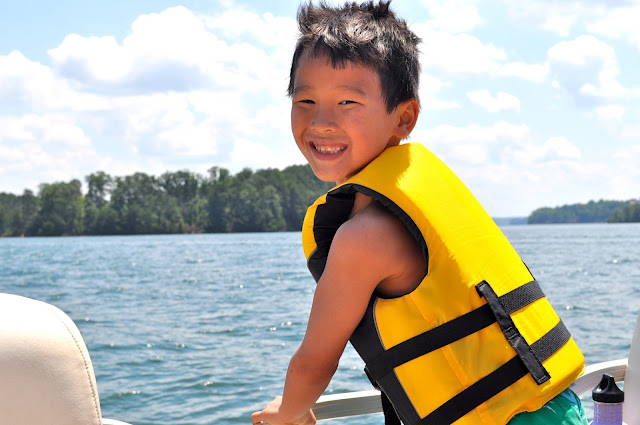 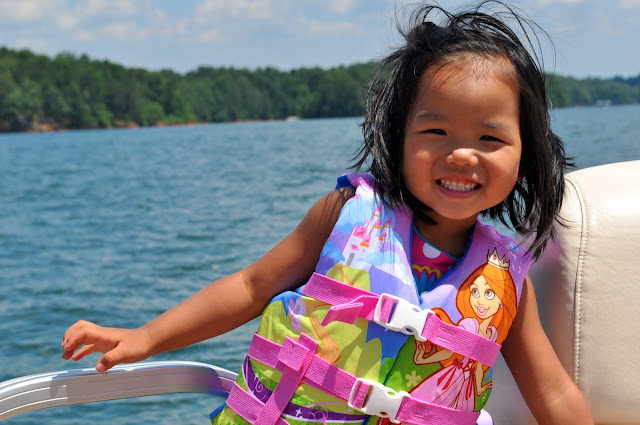 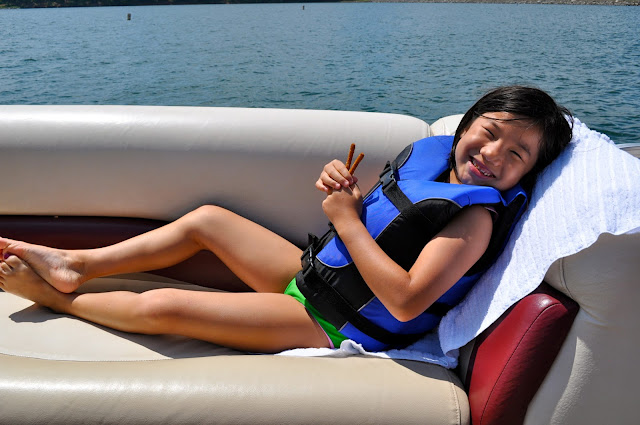 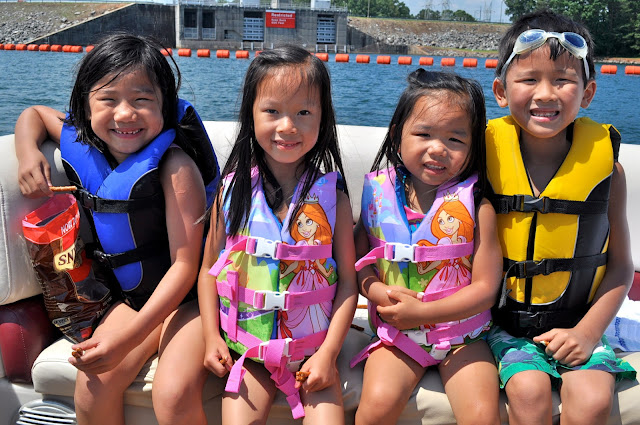 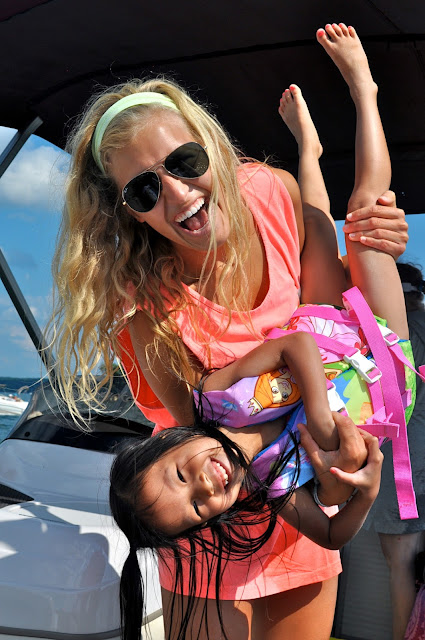 We had some big fun OFF the boat as well!

We discovered our own island! 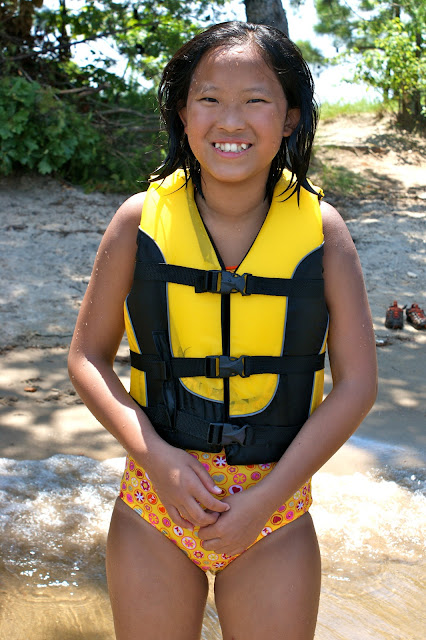 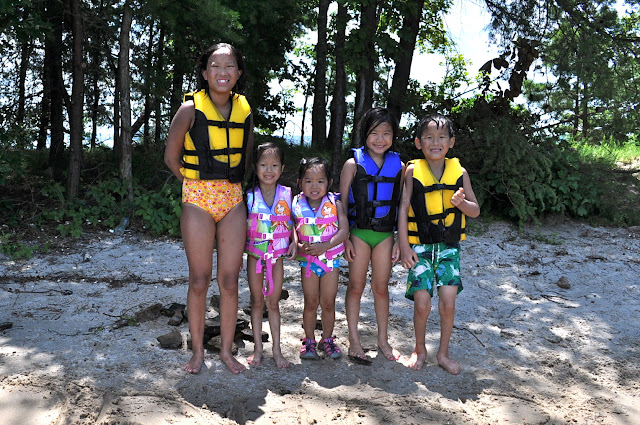 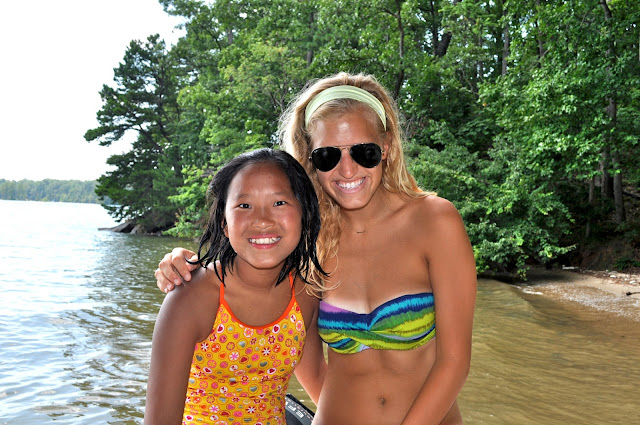 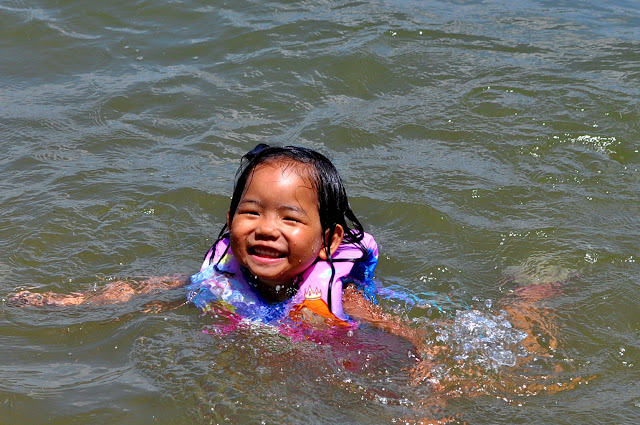 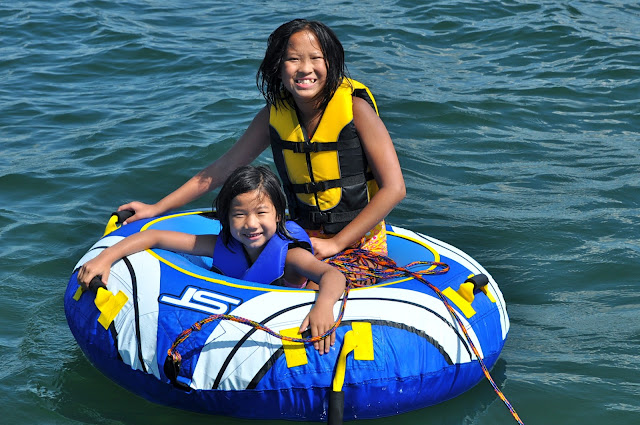 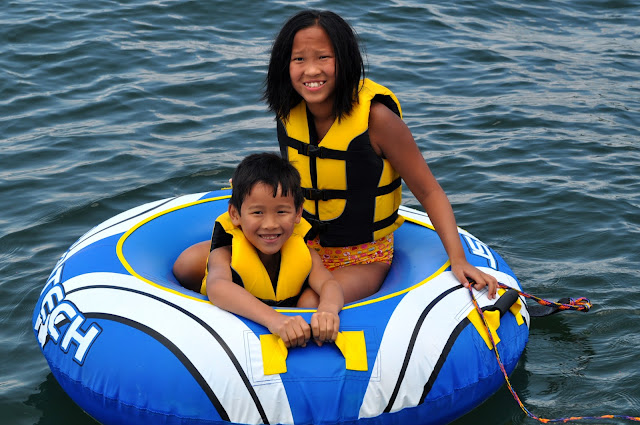 It was a day of fun and togetherness~ just as we had planned!

Afterwards, we cleaned up and headed to
Pappacitos for dinner!

This was a family favorite when we lived in Houston, so we had to give the Atlanta location a try.  And it did not disappoint.

Though the wait was LONG (as it always is) we snacked and sipped and took a few photos! 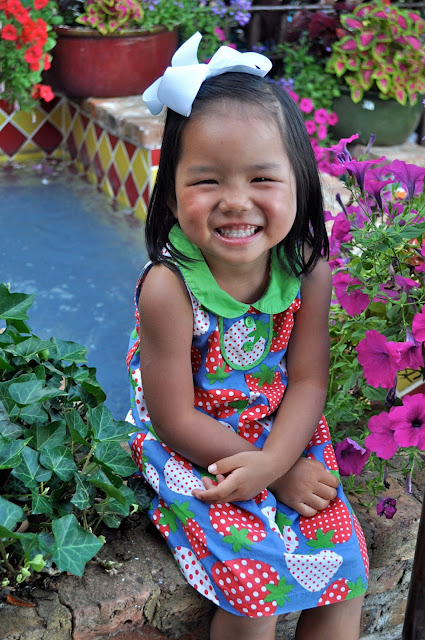 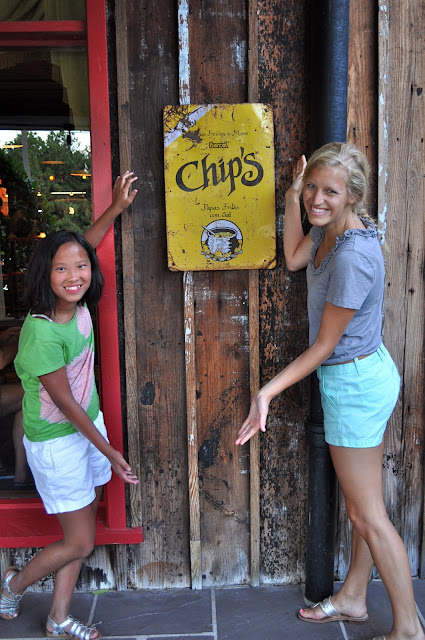 After our tummies were filled, we headed back to our hotel with one less girl, as Grace had her turn for a sleepover with Emily!

Emily leads the middle school girls' Sunday school class, so it was perfect for her to take Grace along the next morning.  We met up with them later that morning for worship.  While there, we were able to meet the other interns and a lot of the staff, which was fun!  Everyone was so welcoming and so excited to meet Emily's siblings!

After church, we headed here 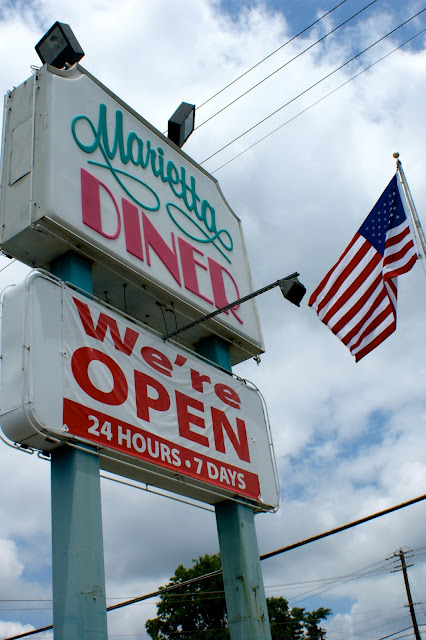 for a yummy lunch!

And then all too soon, it was time to say goodbye. 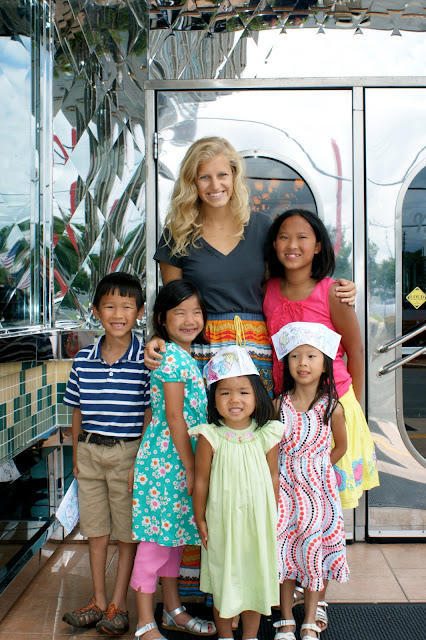 It was great seeing you, Emily!
We sure had fun!  We love you.  And we miss you, too!

Would love to know where she is interning as we.live right here in Marietta! Email is dstraightt@tridia•com.

Thank you for commenting. I accidentally hit delete instead of publish. :(

I tried emailing you and I got the message that it's an invalid email. Sorry.

How wonderful to spend time with Sissy! It looks like all the children loved their time with her!

And you must have really enjoyed it! So special to have these big girls of ours!!

Love all the pics and love your family!