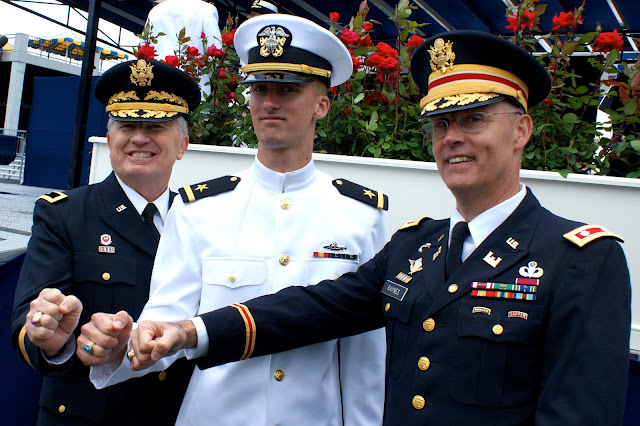 My nephew, Michael, graduated from the Naval Academy last weekend, and our family road tripped up to MD for the occasion!

Graduation day dawned COLD and windy and rainy.  Not the best for the outdoor ceremony, but it was made more exciting by the fact that  President Obama was in attendance. The children loved seeing the presidential helicopter flying in above us, flanked by 2 other helicopters.  While not in agreement with our current president's policies, we respect the office of the President, and remember that it is GOD who sets our leaders above us. Incidentally, this was the first graduation that did NOT have a military fly over~ due to the sequestration. :)

Each year, the president alternates between attending one of the service academy graduations,  and this was the year for him to be at the Naval Academy graduation.  Custom is for the president to hand out the diplomas to the top 100 students and shake their hands. (President Obama, though, did request that he be able to shake each graduate's hand.) Michael, having a class rank of #51 out of roughly 1400 graduates was one to receive this honor.  Interestingly enough, all 3 of the men pictured above had a president in attendance the year of their graduation, and each graduated in the top 100.  Peter, was handed his diploma by Gerald Ford, and Bill (Michael's dad) received his diploma from President Reagan.

I came across this quote by Ronald Reagan this week, and thought I'd share:

Freedom is never more than one generation away from extinction.  We did not pass it to our children in the bloodstream.  It must be fought for, protected and handed on for them to do the same, or one day we will spend our sunset years telling our children and our children's children what it was ONCE like in the United States were men were free. ~ Ronald Reagan

A sobering thought, isn't it, as we currently watch our freedoms erode.

Peter, Bill, and now Micheal, our family thanks you and the countless others who serve and give their lives every day to defend our freedoms. We do not take it for granted.

We were able to do some additional touring while in the area, so stay tuned for another post on that!

how neat to have that legacy in the family! congratulations to your nephew!

What an amazing experience for your family!

They are our heroes as well! What a moving post. My dad served in the Marines after WWII and was stationed in Alaska where the "Red Threat" was. He has always been a hero to me. A huge "Thank You" to the men and women who give of their lives and often give their lives for our freedom. Freedom isn't free. God bless our military.

Wonderful! What a legacy. I just finished reading Unbroken this weekend, a WWII story. It rekindled in my patriotic heart once again a deep appreciation for those that serve our country.

This post made me cry. Yes thank you to these brave men. I can't wait to show this to Jack. He wants to go to the Naval Academy and/or train to be a Navy SEAL. And really what a learning experience for your family!