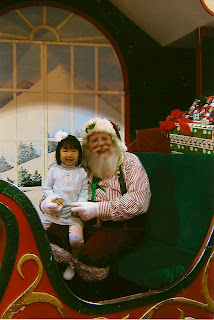 And guess what she asked for? Chips! She's pretty easy to please :)
Yesterday, Mom, AnnaClaire, and Kate went to the Southern Christmas Show with Mia (who is AnnaClaire's good friend and also her Chenzhou sister!) A grocery store nearby sold the tickets for a discount, so the moms decided to meet there and while Mia's mom was putting the carseat in the car, Mom thought she would go in to get the tickets. AC and Kate were both in their carseats, and Mia was sitting on the seat in the front while her Mom was getting the carseat out of their car (which was of course parked right there.) Mom had shut the doors so no one would fall out and taken the keys out of the ignition and set them on the driver's seat since Mia was sitting in the passenger seat. Can you see where this story is going? Mia must've accidentally hit the lock button on the door, because before Mom even went to get the tickets, they realized the car was locked- with all three girls in it! So there is Mom and Mia's Mom, standing in the freezing cold (I think I can say that, anywhere in the 30s is freezing, right?) and AnnaClaire, Mia, and Kate (who are 3, 2, and 1) are in the car! Oh and let me mention that Mom locked her keys in the car at the doctor on Thursday (no one was in the car.) Remembering how long it had taken a car company to get there, and having three toddlers stuck in a car, Mia's mom suggested calling 91*1. So that's exactly what they did. They explained the whole situation, but the lady said they would still send a fire truck. In less than five minutes, a fire truck- with lights and sirens- pulled up and three men jumped off and had the car unlocked in about 2 seconds and all three girls "rescued" out of the car. So that was the excitement of the day.

But anyway, from what Mom said, it ended up being a fun day had by all. Santa was there, and Mom figured AC might as well see him there so we could avoid mall lines and the $8 went to a much better cause (Shri*ners Chi*ldren's Ho*spital) then the $22 you pay at the mall. (In my opinion, it is wayyyy to early to see Santa.) Kate, as you might guess, wanted no part of Santa, so just AnnaClaire got to sit on his lap and tell him how badly she wanted chips for Christmas!

So there's how our Friday went. I was at school all this time and had a school swim meet after (which we won!) so that was fun.

Oh and I just had to mention~ as you know, Kate has had a few doctors appts. in the 2.5 weeks since we have been home. She has yet to have any shots (they are running titers to see which ones she needs, as we know she is probably pretty caught up since she was at Philip Hayden.) she has had her TB test (which is being read today) and did have to get blood out twice. When we got Kate's referral call, we were told she had a hemangioma and anemia. After researching, we knew there was a chance that she might have a thalessemia, a more major type of iron deficiency. Well, we got the results of her blood test, and not only does she not have a thalessemia, she doesn't even have an iron deficiency! Praise God!


Things are going great and we are enjoying our sweet girlS so much. They are both doing so well. Kate is really settling in and so happy. She does have her moments (of whining) but is overall a pretty happy baby. It's hard to believe that this week we celebrate one month with Kate! And in just over 2 weeks, we will celebrate 2 YEARS with AnnaClaire. Just amazing.
Posted by Emily at 9:49 AM

Oh, my goodness! That sounds like some excitement! Glad to hear that they were able to out of the cold car quick!
Chips! How funny!!! My kinda girl!
Praise God---how awesome that her doctors reports are coming back great!
1 month already! Wow!
Lexie

Miss AnnaClaire is such a big girl. I had to smile about the chips because 'chippies" are maddy's absolute favorite thing. Pringles to be exact. Only the ones in the red can. :0)
So glad to hear about Miss Kate's test results. What a little blessing she is!

I'm guessing the camera was locked in the car with the girls...I would love to have seen pictures of the big "rescue"! Sounds like an exciting day! So cute that AC asked for chips!!! Precious!!!

Cute pic of AC and Santa!

I just returned from a dinner with the group I'll travel to China with next year. One of the little girls who is almost 7yo saw 'Santa' sitting at a table near ours. Sure enouth she went over and asked him if he was Santa and he was! :o) She quickly mentioned her Christmas list and let 'Santa' finish his dinner. He was such a good sport!

What a blessing to hear how well Kate's tests came out.

Chips! That is so cute!! AnnaClaire is so adorable!! And it is so hard to believe that is has almost been TWO years!! WOW!!!
That definitely sounds like an exciting day with the three little girls stuck in the car! Glad everything was fine. ;) And Shriner's is an awesome cause! Sarah goes to Shriners and Chayah will too. And speaking of Chayah, only a few more weeks!!! =D
~Staci