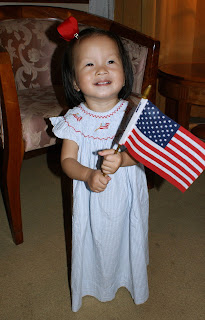 It dawned on me today that you may or may not know that I did eventually post Tuesday's China update. We had no internet in Hong Kong, but I had written it and put it up once we got home. I still need to add pictures (here's a sneak peek), but there is an update. It's under the travel logs on 11/4. By the way- Kate knocked her lip on AC's cot in Hong Kong, which is why she has a cut on her lip. Poor baby :(. It's healing though and looks SO much better today!

I still need to do a home update on the website and I have quite a few pictures from our homecoming and yesterday to add. Bear with me, we are jet lagged and it's been crazy around here with TWO sweet girls. I promise to do a REAL update very soon on both the website and here.

I actually have a bunch of things to post about, including our gotcha video. I meant to add it in China, but I had to edit it because it was too long, which I did not figure out how to do until the flight home, so I am just now getting around to uploading it onto YouTube so I can put it on here. I'll add it tonight :).

Oh and I just had to mention that if you have the Philip Hayden 2008 calender, this month features our precious girl! She was known as "Shia" at PHF.

And then there's the blog. Now that we are home from China and we aren't waiting for Kate anymore, I need a new look and a new name! Any suggestions?

It's been a good day and Kate has been incredibly happy! It's beautiful out, so I think once both girls are awake, we'll try out the new double stroller and go for a walk :)

Awww! Welcome back! I cannot even believe how fast it seems like your trip went- wow! But it is SO amazing that you have Kate HOME!!! SO excited and thrilled for you!!! I was following your site in China constantly; checking it was the first thing I did every morning. ;) So, now on this blog-- CONGRATULATIONS!!!!!!! Kate is such a beautiful little baby girl and I cannot wait to follow her life at home! :)
~Staci

I enjoyed following along on your journey. I actually followed along on AC's journey as well!! You are such a great big sister, so loving! I think you should keep the name "and then there seven" for your blog. I love that name!

So glad you guys are home safely. Kate fits with your family so perfectly. The Lord is good! You could change the name of your blog to "and NOW there are seven" or "Mei meis and memories". Those are just two ideas that popped into my head. Can't wait to follow the rest of the of your journey with your sweet mei meis!

Praying that y'all are getting lots of rest!! Can't wait to follow along on y'alls journey as a family of SEVEN!
Lexie

"Life with AnnaClaire and Kate"

"Journey with AnnaClaire and Kate"

"And then there were Seven..."

"Tigger and Pooh and Emily too"

That's all I can think of right now...

Emily, Welcome Home! I sure am glad to have your mom back. I continue to pray for Kate's adjustments. I know that having you for a big sis will ease any tough spots. No suggestions on a new blog name but I am sure you will think of something cute and catchy. Have a great day!
Nichole