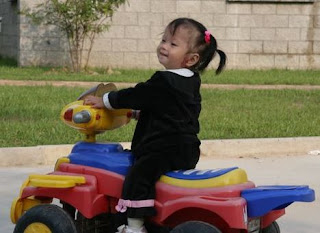 (okay, okay, I know I posted this yesterday but here it is again... because she's just SO cute!) 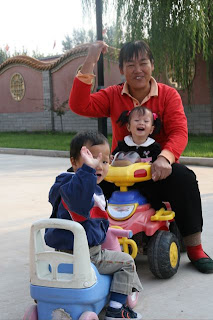 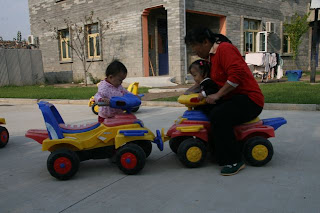 WE ARE GOING TO CHINA!

We will leave early, early on the 23rd and fly to Newark and then on to Beijing. Coming home, we will go Guangzhou to Hong Kong to Newark and finally home.

Our flight to China is INCREDIBLY full. We got tickets, but there was only one available seat! They told us to call back 24 hours before the flight and they would open up the premium seats to everyone. There were not many seats left, especially together. We figured we would just have middle seats all across the plane and hopefully someone would be nice and trade so that Mom or Dad could sit by AC. Well, today Dad was talking to them to get Kate's lap pass for the flight home and he mentioned that we were traveling with a 2 year old, weren't able to book seats, etc. The lady he talked to was so interested in our adoptions and was very sweet. She told Dad that they were not going to make a 2 year old sit away from her family (obviously) so she would go on and book two seats together so that someone could at least sit by AC. She then changed her mind and booked those 2 seats in addition to a row of three... the only full row still open on the whole plane! So now we have 5 seats all together (well a row of three and then the middle and window in the row behind it.) Long story short, WE HAVE OUR TICKETS... and we are GOING TO CHINA!

We still haven't heard where and when we will get Kate. Our agency's in-China rep is supposedly working out all those details and I assume that we will know sometime next week. IF we are allowed to get her at Philip Hayden (that big IF depends on what her home orphanage says) then gotcha day will either be the 25th (Saturday) or 26 (Sunday). From there, we would have to fly on to Jiangxi to do all of the paperwork for her adoption (the orphanage director has to be there, so that is why we would have to go to Jiangxi) and then on to Guangzhou for the consulate. I really don't know WHY they would make her go back. We have said we would fly to Jiangxi, so the orphanage director won't have to fly. Plus, then they won't have to buy two tickets (she'd have to have a nanny go with her). However, if her home orphanage doesn't allow her to stay at PHF, we will fly to Jiangxi on Monday and get Kate then. Which is AnnaClaire's birthday. I know that would make SUCH an awesome present, however, we really would like to keep those two incredibly special days separate. We shall see. Prayers for Kate to stay at Philip Hayden would be appreciated :) She's had to move SO many times (she was found at 2 months old, lived at Shangrao for 2 months, lived at the House of Peace for 13 months, and has lived at the House of Love for 2 months) and we really don't want that for her AGAIN, especially right before her life COMPLETELY changes.

I do want to ask for prayers for a couple of the families that were supposed to be in our group. They found out today that for some reason, they could not get the requested CA and will not be able to travel on the 23rd. They will leave the week after. I am so sad for these 2 families and we were really looking forward to meeting them. I know it's just a week after, but a week is a LONG time when you have a waiting child/sibling and you just want to bring them home.

On another note, I have had SO many people comment and email asking me to post pictures of our big room swap and of things we have been getting Kate. I PROMISE to do that soon. AnnaClaire's chair won't be here until we get back from China and we are waiting for some things we ordered to hang in Kate's room. Plus, there's still a little more hanging for Boo's room. I'll take some pictures of them to show you sneak peeks soon. Most of the things we have bought Kate are AnnaClaire's. She'll be in the same high chair, same Ergo, and her carseat is the exact same one, because we have had one in each car (since we knew we would be adding Kate, we just figured we'd get the extra use while we waited!) We'll move them both in Mom's car. We did get the BEST sit and stand stroller that I'll have to post a picture of. AnnaClaire LOVES it. Oh and a bunch of ADORABLE new clothes. Matching. :) AnnaClaire does have tons of cute hand-me-downs though, so they are not all new. I will definitely post some of my favorites soon. I also need to post those pumpkin patch pictures. I also need to finish my last "God story" post. It's a good one that I have really been meaning to share. Finally, as I mentioned, we are going to Atlanta this weekend and will have lots of pictures from that. There's just so much excitement going on around here and it's hard to keep up with it all! :)

What an awesome story. God truly does work on the hearts of people to make things happen! :0) So glad you will al be together on your flight to China.

Have a safe trip this weekend. I'm sure the wedding will be beautiful!

AWESOME!!! SO, SO, SOOOOOOOOOO excited for all of you!!! So glad to hear that the tickets worked out...can't imagine a long trip with all of you separated! Hope the packing is going well. I wonder if you'll get the same guide we had when we were in LangFang (Maria). Sending all of you love from Oregon.

Yeah how exciting! And so glad everything worked out well with the tickets. Two weeks will fly by!

Have fun in Atlanta. Too bad we cannot meet while you guys are here!

Congratulations! I've been lurking for awhile. My best friend and her husband are adopting from Haiti, which is how I've ended up on some adoption sites! Kate is a cutie! :)

Aww Emily! How fun! So excited for you and your family. Isn't it nice to be able to count down days?

From what you've written, looks like we'll be meeting you in Newark...
I'll be praying for you guys as you prepare for the trip!
Can't wait to meet your family!