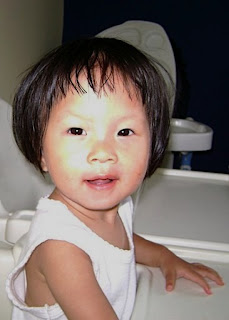 I know I sounded really down yesterday (day 70 was a hard one!), so I did want to mention that my trip was really great. Every year, our high school goes to a young life camp before school starts. It's really fun and just a good time to see everyone again. They have all kinds of things- blob, zipline into the water, a huge water slide, this really cool swing that two people go on, rock climbing, a pool and hot tub, sand volley ball, an ice cream/slushie shop, etc. So, it was just a really awesome time of getting to see everyone/meet new people. That is one of the many things I love about going to a small, private, Christian high school. I know almost everyone. Most of the public schools are so big and people don't even know everyone in their grade- let alone their school. Our grade of 70+ is very close and we all always have a good time :). It is also very cool to be able to connect and know everyone. Our small groups were made up of a few people from every grade with seniors leading them. It, of course, is also awesome being able to talk about our Lord and Savior at/during school/school events. I think a lot of people take that for granted.

I did want to mention a prayer request. Kate has had a lot of moving around to do in her young life. She was found at 2 months old, so that is two months she spent with her biological family. She was then brought to an orphanage in Jiangxi where she lived for another two months. In July of 2007, she was moved to Philip Hayden where she has been for the last 13 months. She lived in the House of Peace for most of that time, but was just recently moved to the House of Love. Anyway, she has had a lot of moving around and change and to be honest, the last thing we want is for her to have to move back to the orphanage. It is simply not good for her at that young of an age to be moved that many times. So I pray that somehow we will be able to get her at PHF rather than her being moved back to the orphanage the week before we get her. I KNOW this has happened more than once and I pray that God would allow it to happen in our case. While we would still have to fly to Nanchang to complete the adoption, it would just be so much better for her if we could get Kate in Langfang- which is only 45-50 minutes outside of Beijing. Praying, praying, and I ask you to join us in prayer about this!

Emily,
Kate is so beautiful, and I know how badly all of you want her home! Here we sit at 4 weeks and 2days since LOA without our TA. Like you, we have watched so many people who started w/ us leave on a plane and come home w/ their babies while we still wait. To me, that is the hardest. Remember, God is in control and His plan is always perfect even if it hurts a lot along the way.
I'll be praying for you.
In Christ,
Mrs. Jan