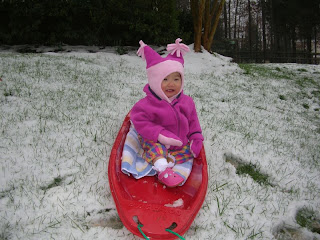 We are supposed to get 3-5 inches of snow tonight/tomorrow. Which is a big deal here! It's been a few years since we've had a real snow. Last year we got maybe a centimeter... not even enough to cancel school (which here in the south, it doesn't take much snow for school to be canceled!) The year before, we had maybe an inch. Needless to say, we are all hoping for a day off of school and a nice little snow... Booie is especially excited about the 90% change of snow! The last time she really saw snow, she had been home a month and was 15 months old... and even then, it wasn't much!

This morning, when we were excitedly talking about the chance of snow, she said, "Maybe God and Jesus will send me SNOW!" and before she went to bed, we prayed that it would snow as she chattered about what she was going to do if it snowed. I really hope it does for her sake (and because I wouldn't mind missing another school day!)

Update: we did get a couple of inches and I have taken some cute pictures :)
Posted by Emily at 11:24 PM

It snowed here, so i'm assuming you did get some snow.
Take pictures of AnnaClaire and Kate in the snow, I would love to see them :)

oh girl, you know this Texas girl would do ANYTHING for snow!!! Any yes, just like you said...our whole city shuts down whenever we get a couple of inches. But, I don't guess snow is in our forecast anytime soon...considering it is in the 70's right now! Agh...

I prayed for snow too...