"The pwane on the Hussen!" 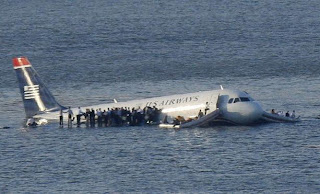 This afternoon, we were out TV shopping when AnnaClaire started talking about "the pwane on the Hussen." How she remembered that, I have no idea. I mean, it was a week ago and she even remembered the river's name. She's pretty smart, if I do say so myself. Anyway, it reminded me how I had really wanted to post about it.

I'm sure you've heard, but if not, just google "Hud*son Riv*er Miracle." (take out the asterics, of course.) In short, a plane was flying from NYC to Charlotte, ran into a flock of birds, the engines blew, and the plane landed in the Hud*son Riv*er. Everyone survived. Pretty amazing.

That plane was headed to our city and one of the people on it goes to our Church. He was working up in NYC and was headed home that day... one of the 155 passengers aboard that flight.

On Wednesday, he was able to share his story with our youth group. Not even a week after it happened, and he was recovering from a touch of bronchitus. Amazing.

He shared his story and his perspective of the flight. He talked about how his wife was pregnant and his biggest fear as he went through that scary moment was that he would never meet his baby... and his wife would have the raise the baby alone. Yet he was okay with the fact that Christ was taking him home. Can you imagine? Can you imagine being up in the sky on a plane that was headed for a river, as the pilot screamed, "brace yourself for impact"... thinking you were about to die?

Of course, as you know, the pilot skillfully landed (you keep hearing crashed, but it literally LANDED) on the Hud*son Riv*er and everyone survived.

The plane landed at the busiest section of the river, yet there were no boats in the path of the plane. That also meant that there were a bunch of boats that were able to come rescue the people- whom did I mention were standing in 35 degree water. It occured during a time of day when there were double the people on staff, as they were switching shifts. The pilot was an experienced pilot and and practiced landing on water in his spare time. The ice that appeared on the river the day before, and the afternoon of was nonexistent, making it a smooth landing. Everything was executed perfectly so that the plane landed just right and was not immediately sunken. The worst injury on the plane was two broken legs. Everyone survived.

Truly a miracle. We're still in awe over it. I'm glad the man from your church, and everyone else on board was okay.

Thank you so much for sharing your friends first hand story. It was an awesome landing. Praise God for the pilots great skill.

And how smart is Anna Claire!

That is God! Praising Him for the landing and safety of all aboard. Thanking Him for sparing the life of your friend at church!

I agree that's God! We serve a mighty God who is in the details!!!! Recently I have seen him in intimate tiny details that only he could have orchestrated(sp). It makes me smile when I think of how good he is to us.

To God be the Glory,
Lori