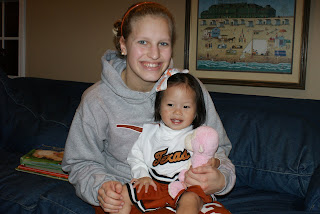 We're all wearing our Texas gear and in the football mode because tonight, Texas is playing in the Fi*esta Bowl against our sweet friends' team, Ohio State! Let's go TEXAS!!! Of course, I do strongly disagree that Oklahoma is going to the National Championship and not Texas (if you don't remember, Texas beat Oklahoma) but it is still a great match up and will be a great game :) Hook 'em horns!!
I know I've talked about my beloved Long*horns a lot. I just have to say once again this season how much I LOVE Colt Mccoy. Not only is he an amazing football player, but he is also a strong Christian. I love that Tim Tebow (Florida's quarterback) said the following of Colt Mccoy, "I was really proud of him because I think he represents college football and his faith extremely well, too, which I really respect as well. I think he's done a good job with everything he's going through." I think it's just awesome that someone he plays with recognizes this in him... what an awesome thing to be recognized for!! 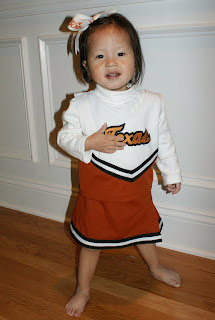 Hook'em Horns! Our family also loves Colt McCoy & think he is a great role model for our kids.
Love the cheerleader outfit!
(it is halftime, that is why i'm on the internet!)
I agree with you--we should be playing for the national championship--maybe next year.
Lets Go Horns!
Jennifer

Well, I was pulling for OSU (my dad did his graduate work there and I can remember sitting on the couch and pulling for the Buckeyes with him as a child) but I wanted to say congratulations to you Texas fans!

Great Game! I can finally post now too on my new computer. WOOHOO!!
Congratulations to your Texas Longhorns. :0) It was a nerve racking game that's for sure!

ps, tell your mom we are praying for your family and brother right now. I don't have her email address just yet as this is a mac computer and I'm just learning the ropes. :0)