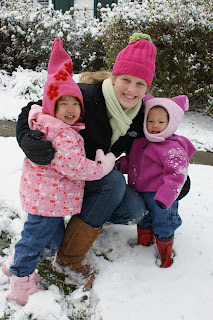 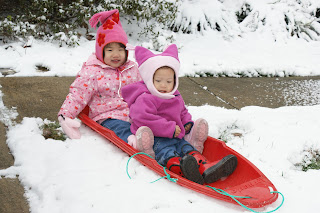 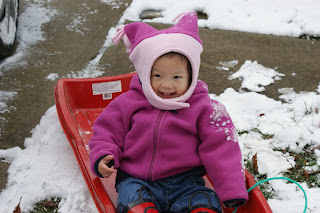 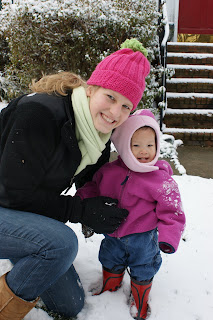 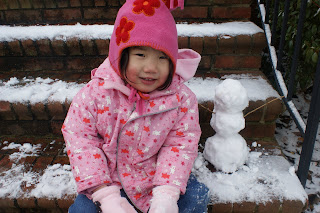 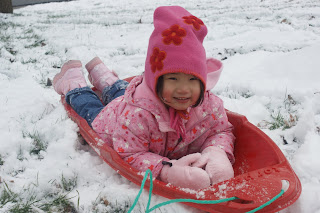 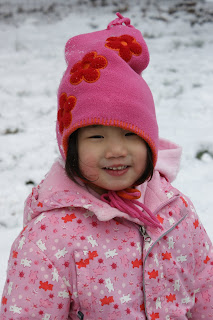 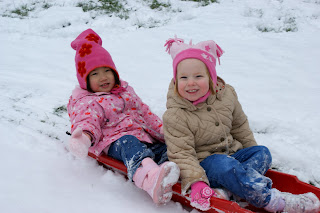 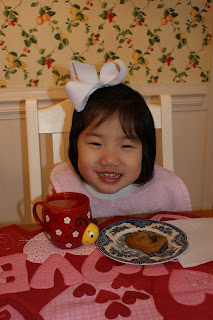 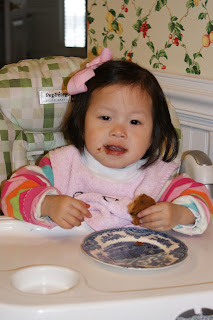 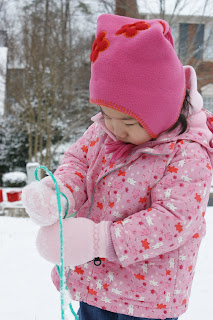 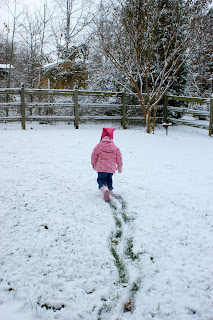 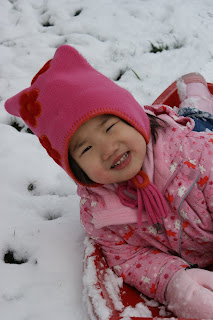 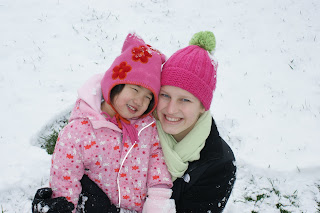 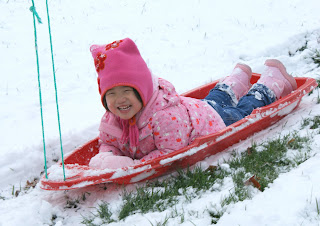 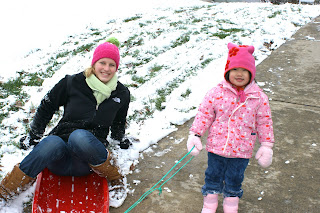 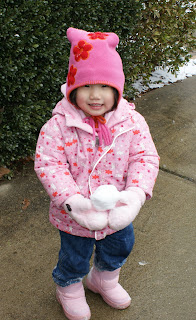 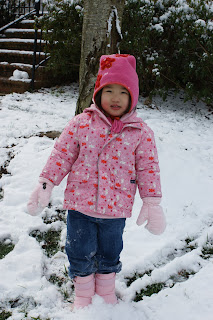 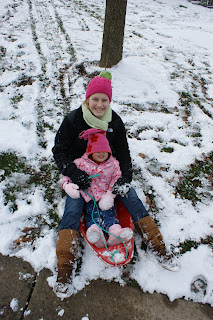 I was almost as exicted as AnnaClaire when I woke up to see snow and realize there was no school! We continued a lot of snow traditions and created a lot of snow memories today! I was glad to have the day off (which made it a four day weekend.. nice!) and AnnaClaire was glad to have a snow buddy! First, we enjoyed pancakes for breakfast. Dad, AnnaClaire, Kate, and I then went outside into the snow. Kate enjoyed sledding a few times, but after a few minutes, was ready to go inside. Since we haven't had a good snow in YEARS (and when I say a good snow, I mean 3+ inches. Well, there was that one year we got near 20 inches...) we didn't get snow gear this year. So, the girls outfits were a little makeshift and I think Kate got cold. I don't blame her considering she was wearing AnnaClaire's rainboots which are about 3 sizes too big. AnnaClaire was plenty warm in her foot pjs, long sleeved shirt, jeans, fleece, coat, hat, mittens, and boots and she enjoyed a long time of snow! We had so much fun sledding, making snow angels, making footprints in the snow, making a snow man, and playing with some of her little friends on the street. One of her little friends was talking about how they had gone inside for hot chocolate, so AnnaClaire decided she wanted some. Meanwhile, Kate was helping Mommy make cookies! When Booie and I went in, chocolate chip cookies and hot cocoa were waiting! We enjoyed that before going back out and enjoying more snow fun! Finally, we were so cold and hungry that we decided it was time to go in for lunch. We had grilled cheese and bean and bacon soup (another snow day tradition... when it doesn't snow much, you can have those!) AnnaClaire read some of her snow books and then took a nap. We just got back from a few final rounds of sledding and took a little walk in the snow. Sadly, it's melting (amazing how snow can melt so fast when its below freezing... hmmm...) so we'll be back in school tomorrow. But we did have SUCH a fun day in the snow. AnnaClaire is most definitely a snow girl and is already asking when it's going to snow again.
Posted by Emily at 5:45 PM

Oh, I knew I wouldn't be disappointment today!!! Thanks for posting LOTS of pictures of your fun snow day. I heard about it from your Mom. Love that AC prayed for it! :-) Hopefully, God won't answer her prayer like He did mine. 20 inches of snow over 2 full weeks. Oh my. Guess I prayed too hard, tee hee. Oh my goodness, Kate looks SO tiny in the pic of her outside with you. What a cute little button. Blessings to your fam, Amy-in-sunny-OR

Looks like you all had such a fun day! I'm sure you enjoyed your day off from school...I know my boys did!

I'm SO jealous! we had the AC on in the van today and I was wearing shorts and flip flops..would have LOVED to have been in snow!

y'all look so cute in your snow gear! and it looks like you had a ton of fun!

Your day sounds very similar to ours. We'd play in the snow until Kylie's teeth would chatter and then head in to warm up before taking toasty clothes out of the dryer and heading back out.
Great pictures, and I love AC's hat!

Too Cute!!! I think it's awesome that Anna Claire prayed for snow and God listened! I'm so glad you got to enjoy such a fun snow day!

Hi Horner Family!!! It is so much fun seeing the photos of your family back home. You inspire me to post on my blog, haven't done any photos since first arriving home. The snow looks fun!
Tina, Ken, Clayton, Zach and Luke
www.journeytozachandluke.blogspot.com

WOW.. I can't believe how much snow you all got. I thought NC was supposed to be warmer than Ohio.. hehe. Well, I guess it was warmer since we were in the negative numbers with the windchill earlier this week. Today was awesome though.. a big 42 degrees. Felt like a heat wave.
The girls and you looked like you had a wonderful time. And, there is nothing like chocolate chip cookies and hot chocolate waiting when you come back in.

It cracks me up how you guys didn't have school with only that much. We have over 30 inches already this year!