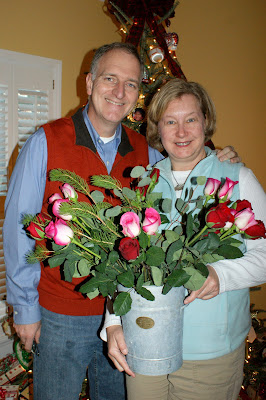 Today is Mom and Dad's twenty-fifth wedding anniversary.
I'd say that's a long time.
It's also the 4 year anniversary of the day they officially decided to adopt a little girl from China!
Yes, it was over dinner at PF C*hangs on their 21st anniversary that they decided to start the adoption process.
Funny how God works. How 4 years ago today, we decided to adopt. And how today.......
Well, that's a story for another day...
Posted by Emily at 5:24 PM

Now Emily, it isn't nice to leave your readers hanging like that...
Happy 25 years to your folks, Ian and I are nearly 15 behind. What an example they set!

and today, yall are about to adopt child #3? or is there MORE news that we don't know?! (maybe not another adoption, but SOMETHING exciting to share?!)

and I absolutely LOVE where the Lord has your parents at their 25th..and their 4th anniversary of deciding to adopt. God is so good!

Happy Anniversary Pam and Bill! Some people go on cruises or exotic trips for their 25th anniversary - Kevin and I were in the process of adopting Philip when we celebrated our 25th! That has been the trip of a lifetime! And you both and Kevin and I are about to take another one with our journeys to Charlie and Eli! We sure do like the way we all celebrate those milestones!

Love in Christ - Janet, Kevin, Ted, Philip, and waiting for our Eli

ha ha...... Tell your parents Happy Anniversary! and Merry Christmas to you all. I hope their 25th year is filled with lots of blessings.