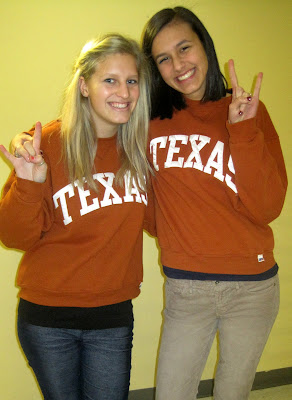 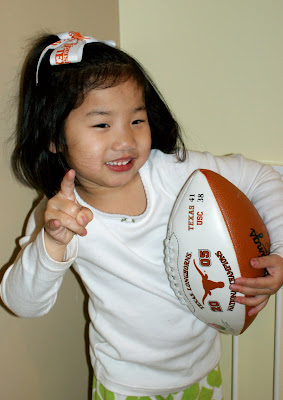 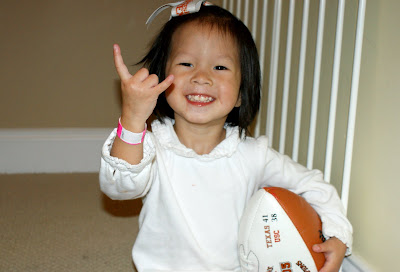 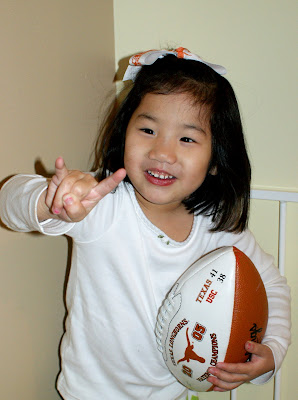 Well, the game is over, and as you may or may not know, Co*lt Mc*Coy was injured and out of the game at the very beginning. Surprisingly, they came back and made it close before the backup QB (who has played in just a few games when they were up by a LOT) gave up some turnovers. In my eyes, I don't believe that it was a fair game at all, and I feel so terrible for Co*lt. However, I think his words at the end spoke volumes. I wish I had written them down... but basically, he very emotionally gave God the glory, stating that he didn't understand WHY, but he knew that God had a reason and was trusting that. He gave God the glory after his hopes and dreams of the past few years were dashed. In my eyes, that makes him a true winner. Just wanted to share, as I think it was such an encouragement.

Oh and now I'm putting this below Grace's post so it can be at the top of the blog, as it wasn't there long :)

Love the little girlies getting into the action! Kylie and Caleb saw the first few minutes of the game and cheered when Alabama scored a touchdown, yelling "Go Hokies touchdown!" Guess the red color was a bit confusing...
I'm still pulling for Texas!

Yeah! I'm not into football, but I had the ending on waiting for the local news to come on, so I heard what he said. I thought the same thing.
And I also love how the little girls got into the action. Adorable! :)

lol, I was like "where did the game entry go?!" haha

Being a Penn State and Ohio State fan, I didn't care at the beginning of the game WHO won. But I started to cheer for Texas, because of the quarterback story. I thought they were going to make a comeback and win. So, sorry your team didn't win, but the quarterback's words and story just may make an impact on someone. God can use it!