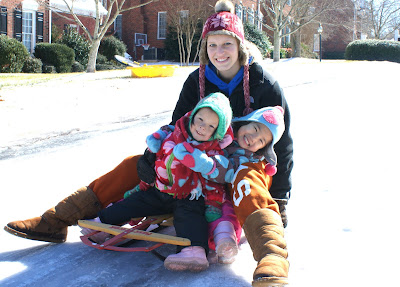 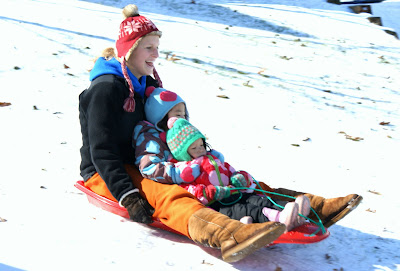 Despite the fact that I went to get AC this morning and she was crying while saying, "the sun is out! All the snow is melting," it did stick around for another day... the first time we have had TWO snow days in a row in YEARS. Church was cancelled, so we had a late breakfast of coffeecake muffins and egg casserole and then the girlies begged to go "fledding" (as Kate calls it) again! All of the kids on our street were out and about making it a very fun afternoon... with lots of excitment on the big hills :) The girlies and I went up and down, up and down, as Dad talked to the nieghbors and rated the girlies sledding runs... which was a total hit to them! (and to his credit, he did go down a few times!) The girlies enjoyed sledding today just as much as yesterday and we got up to some big speeds after all of the snow froze over last night and we were left with a LOT of ice! There was more hot cocoa and cookies for snacks, and AnnaClaire played out in the backyard by herself for over an hour! Both girls are just LOVING this white stuff! I'm just happy because even though a LOT melted, there's still enough on the streets (and a high of 13 tonight to refreeze the wet roads!) so school was cancelled! WOO!

Thank goodness for snow... and the excitment it brings each and every time it comes... and a very fun, snow filled weekend! (and of course, that despite the fact that we HAD to have our 2 snow days over a weekend, that I'm getting me day off after all!

Not many pictures today... figured I had enough from yesterday and today was kind of the same... plus, sometimes it's just nice to enjoy things without always taking pictures!
Posted by Emily at 10:08 PM

We hit the "slopes" today too, but today it was a golf course in Greenville where we went to visit my brother. And the laundry basket made a re-appearance...
Happy no school day to you tomorrow!