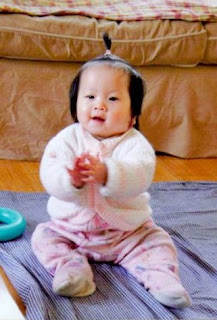 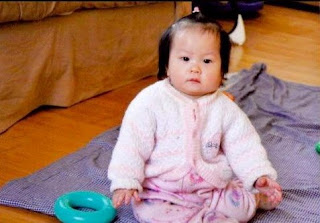 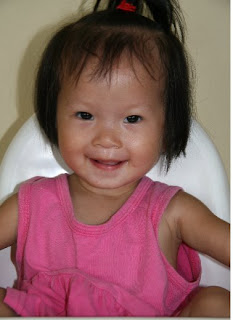 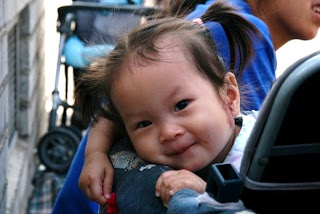 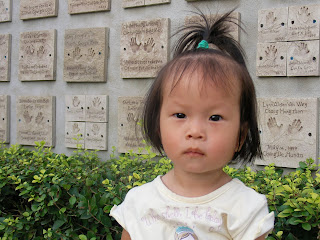 (First two pictures are referral pictures, the rest are a few of the many updated pictures we have from Philip Hayden. The last one is our newest- taken last week!)
Now that we have LOA (I'll get to the story momentarily) I guess I can "officially" introduce our Kate. I know most readers know most of this stuff already, but there are a few "new" details that I can finally share!

She was found at 2 months old and brought to Shangrao Children's Welfare Center in Jiangxi. She lived there for another two months and then she was brought to Philip Hayden in Tianjin (where she is now-- known as Shia.)

Now for the LOA story...

The call came at 1:55, when I was obviously at school. I would've been in the very end of Bible class. Shortly after Bible ended, I went to history and emailed my mom to tell her that I would be a little late because I was going to the beta club meeting. (We use laptops at school and gmail is one of the few sites that isn't blocked.) About 25 minutes before class ended (3) I checked my email to see if Mom had emailed me back to tell me where she was going to pick me up. She had not mentioned that, but I did see a new message from her and next to it were the words, "Em~ IT CAME!!!!!! I JUST got the call!" Of course, I started hypervenalating. And I couldn't make it too obvious. My teacher probably would've thought I was playing a game or something. He was probably wondering why I was smiling so big. I honestly do not know how I made it through those last 25 minutes. Everything he said completely left my mind. Indentured servants, indigo? Who cares, WE GOT OUR LOA!!!!! I thought it would never come. I am still in shock. FINALLY... it's here!

So that's my side of the story. For Mom, it was (obviously) different. At 1:55, the phone rang. It was AWAA's number, but Mom had called Melissa on Thursday, so she thought maybe she was just returning Mom's call. I think Mom had lost all hope when not Melissa, but Amy (another FC) said, "Hi Pam, it's Amy. Melissa had really wanted to call you, but she's not in." Then she said it... "But I just wanted to let you know that we have your LOA!" I'm guessing there was a whole lot of screaming at that point! :)

Praise God from who all blessings flow!

Now I have loads of homework! Of all days! How am I supposed to concentrate when we just got LOA?!?!?!

Anyway... So what now? We should receive TA anywhere from 2-4 weeks. After that, we can start making our travel plans!!! Amy said to plan on traveling mid to late October. I'm hoping for mid (remember, our visas expire on the 22nd, so we have to be IN China by then!!) So, we are praying we will have our TA sometime in the month of September/early October!

So it looks like we will be traveling to China in October!!! I've heard China is gorgeous in October...

YEAH!!! I'm so happy for you and your family! Guess what- our TA came today too. Double YEAH!
I sent an e-mail to you (or so I thought) w/ the big prayer request: the agency is trying to get us in to leave Sat. The other family has INS expiration issues and they are asking that they squeeze us both in. God is in control of this part too so I pray and I rest in His perfect plan!
Praying for a much quicker TA for you as 6 1/2 weeks is TOO long!
Love,
Mrs. Jan

WOOHOO... I'm so happy for you guys. I know you are busting at the seams! Maybe you'll get your TA lickity split like we did for Maddy and be out the door by the end of September and on your way to China. It's still pretty warm in China right now so you'll be able to pack lighter. (less winter stuff) So happy for you!! Really!!

Congratulations!! I am so happy for you. Can't wait to follow your trip and get an extra glimpse at Kate's housemate, our Elijah. :) Hopefully he's being extra sweet on her since I hear he's great with the little ones!

I love your new blog design! October will be here before you know it!

Congratulations!!! What happy news today all around! We got our CA! I pray the wait for TA comes quickly for you. Many blessings!

Wow, that is great news!!!! Congratulations. We're so very happy that you've gotten your LOA. Just one more hoop to jump through til you're off the China. Jiangxi Province, right? Nanchang? Wish we were going to be there too!!
Love,
Green, Party of Five

Yippee!!!! I am so excited for you guys. Thank you so much for helping me find all of the pictures of Piper. You are an angel to me!

yeah! COngratulations!!! I bet China will be beautiful in October! SO happy for your family! Congrats!
Ahnna

Congratulations!!! Kate is absolutely ADORABLE, and I know your family can't wait to hold her in your arms.
Wishing you safe and speedy travel.
~LJ

Congratulations! I am so excited for you and your family!!!

Your little sister is so very adorable! I look forward to meeting you on our trip to China!
Here's praying for quick TAs for both of us!
Kristi