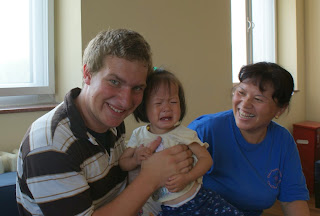 We got another picture from Drew. I love it even though Kate is crying... those two little teeth are just so cute!! These are such special pictures to have! It really amazes me that he has met her. Anyway, I wanted to share some additional info about Philip Hayden that he has shared... This is his exact words.

"I was quite impressed with just about everything at Philip Hayden. The facilites are very new and modern, and they are in the process of adding even more. They also did a very good job creating a home-like environment for the children, which is something that I think is very important for their development. I honestly felt like I was at someone's house than an orphanage. I was also talking with the American caregivers there about the long term goals of Philip Hayden. What I thought was really interesting was how they are trying to find occupations for some of the older children who are not adoptable. One of the things she was telling me was that they are trying to make a house dedicated to arts and crafts, where they would then make artwork to be sold. The caregivers all seemed very professional and dedicated to the children. Though they have upwards of 100 children living there, it did not seem overcrowded or overwhelming at all. There also seemed to be a healthy amount of interaction between all of the children, and a myriad of activities for them to take part it.

Of course, the highlight of the trip was meeting Kate. I doubt most people can claim to have met their sister before their parents did, but I guess I am an exception. She is very sweet. Quite shy and slow to warm up to strangers, but, judging from the way she interacted with her nanny, will be a lot of fun once she warms up to us. I wish I could have stayed longer, but she went down for her nap about 45 minutes after I arrived. I am anxious for my parents to come to China and pick her up."

He is having a great time and so glad to be there. If you watched any of the marathons during the Olympics, you probably remember them talking about Peking University. That is where he is and I've heard it is GORGEOUS. He is just having the best time. We have been able to talk to him on the phone a few times... 2 cents a minute, not bad! We are very excited to see him again when we go to get Kate and of course that he will be able to be there. Perfect timing, isn't it?

I wanted to share a video that Tabitha has posted on her blog from PHF's Olympic celebration. I think this is just awesome... the stuff that Philip Hayden does with the kids is just AMAZING. Not only did they have a fun Olympic celebration, but they took the older kids to some of the events in the Olympics. How cool is that? These kids got the chance to do something that most people will NEVER get to do. I think that is just the coolest thing ever. So, here's the video. I spotted Kate in it a few times :) She had on a light pink dress with green and yellow in it.

Your newest sister is so cute! Awesome that her brother was fortunate enough to meet her first! Stumbled on to your posts through Suzannah's blog - I think! Anyway, I enjoyed reading about your blessed family and wish you all the best as you await your meeting with Kate!