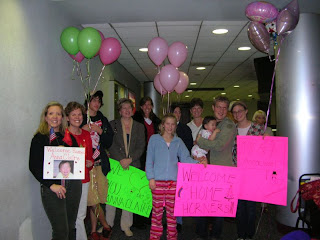 Our sweet friends who welcomed us home! 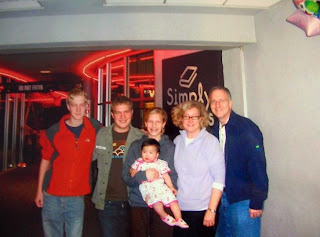 Our first picture as a family of six 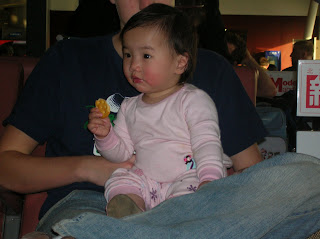 Sweet girl enjoying snacks in the Guangzhou airport... the start of our 32 hour journey home.
December 20th was the day we brought AnnaClaire home from China and became a family of SIX! (Drew didn't go to China with us because he was in his freshmen year of college and had finals.) We got up at 5:00AM in Guangzhou and flew to Beijing. I will never forget that we ran out of diapers and let's just say AC had many poopies that day. Another family in our travel group traveled with us to Newark, so thankfully they were able to lend up pullups and we were able to borrow some diapers from some other people on the plane. Anyway, we had a pretty long layover in Beijing, they checked our carryons after we had been through security, there were no diapers, and we had some Starbucks before flying to Newark. What a flight! We were blessed that it was empty and we had 2 rows for the four of us and AnnaClaire. I slept 8 hours of that flight... nice. AnnaClaire slept maybe 2 minutes. We finally landed in Newark, found diapers (last package in the 4th store we checked!) ate some California Pizza Kitchen and headed to our next gate. We were already due to arrive after 10 and guess what? Our flight was DELAYED. For awhile. We were SO ready to get home at that point. We had been traveling for almost 30 hours and we were SO DONE. Plus, we had a 13 month old who had had very little sleep in the past 30 hours. (She did SO good despite that fact!) Finally, we boarded only to sit on the runway for over an hour, as we were 27th in line for takeoff. Oh the joys of traveling right before Christmas! Thankfully AnnaClaire fell asleep and slept from then until we landed, right at midnight. We had some very dedicated friends who had been at the airport waiting for an hour and a half and were there even at midnight to welcome us home. What a bittersweet moment, especially since Drew was there and we became a family of SIX! It was SO good to be home. We had left the morning of the 20th, endured 32 hours of traveling, and now were home... right before midnight on the 20th. What a DAY. We spent a good amount of time at the airport introducing everyone to our precious new addition. One of our friends who lives in our neighborhood took us home to a decorated house and yard and a kitchen full of food. AnnaClaire explored her new home, as no one was tired although it was now almost 2 in the morning! She had her first bath at home and slept in her crib for the first time that night. She was finally HOME. What a blessing and joy she has been and continues to be! The time we waited for her was incredibly hard (It's so hard to have a picture for almost 5 months before you get to hold that sweet thing!) but I don't even remember that part anymore. All that matters is that she is home safe and sound where she belongs. What a joy our precious AnnaClaire has been and continues to be!
Posted by Emily at 10:58 PM