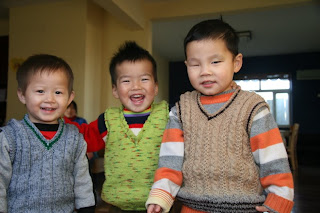 As I'm sure you know, Kate lived at Shepherd's Field for 15 months before we adopted her. I could go on and on about what an amazing ministry is occurring there. It is amazing place, I have seen that first hand. We have also seen that in our precious girl! I urge you to visit Philip Hayden if you ever get the chance. Anyway, I just had to share a few things that are happening there...

The picture above is of Charlie, Jacob-Jai & Henry. (Aren't they ADORABLE?! They live in the House of Love- which is where Kate lived for 3 of the 15 months she was at PHF. The other 12 months, she lived at House of Peace.) Do you see the vests they are wearing? They were hand knit by their nannies! How sweet is that?

FOUR little ones at Philip Hayden have been adopted so far THIS month! Brett and Dillon (twins!), Holly, and Drew all met their forever families! Is that not AWESOME? And four other families of PHF kids are waiting on TAs and hoping to travel end of this month/early January!

SIX children at Philip Hayden recently had their adoption paperwork started! The files of Ella, Cameron, Zoey, Joelle, Kennedy, and Noel Joy are being prepared!!! We were able to meet quite a few of these little ones and let me tell you... they are SOO sweet!

Around TWELVE kids will be coming to Philip Hayden this month!!!!!

God is doing awesome things at Philip Hayden! However, there are lots of kids who need sponsors. All of the kids have sponsorship pages set up where you can read about them/see pictures, etc. and choose to sponsor them. I recently came across Kate's sponsorship page and wanted to share. Kate was once considered unadoptable because they thought no one would want her because of the mass on her cheek. Thanks to her sponsors, she was able to receive steroid treatments, which ultimately "allowed" her to be adopted... into our family! You would NEVER know she was once considered "unadoptable." Her face is completely symmetrical and there is not even a slight mass. We will be forever grateful to her 8 sponsors who made treatment possible, ultimately getting the director to realize that she WAS adoptable and there WOULD BE a family who would love her more than anything in the world!

UPDATE: For those wondering what list PHF kids are on, I'm not sure. Most of the little ones I know of being adopted from there recently were shared referrals, so I am guessing most of them come off the shared list, but I have no way of knowing that for sure.
Posted by Emily at 2:47 PM

Hey Emily. I love this post. I was wondering if you know if the kiddo's at PHF are on agency specific lists or on the shared list?

Kate is beautiful and seems to be flourishing at home. So glad she is home for Christmas this year. Happy Holidays!!

Emily, thanks for advocating for PHF. Your music is making me cry! Wishing we had our boy home for Christmas, but we will sure have a pile of presents waiting for him when he gets here. God bless.

Jacob Jai is our sponsor boy and we are completely in love with his pictures, smiles, and stories that we read. We are praying for a family for him, but if that doesn't work we are going to start searching for him in the sea of kiddos and agencies as soon as we get back with Piper!